Neither rain, nor sleet, nor a bear or other crazy experiences has kept Jesse Lee Hatfield from delivering the mail — they just motivated him to write a book.

“I love being a rural mail carrier,” Hatfield said. The 55-year-old lives in Conway, but he has delivered mail for 23 years for the Greenbrier Post Office.

When he and other carriers gather at the post office, they all have stories to tell about friendly — or not-so-friendly — pets they’ve encountered or funny things that have happened. Hatfield started jotting down his experiences a few years ago and in September 2014 published 72058: The Many Mini Adventures of a Small-Town Mailman. 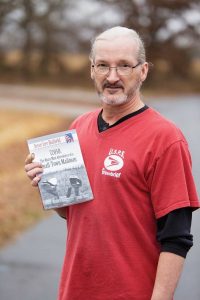 Jesse Lee Hatfield of Conway holds a copy of his book, 72058: The Many Mini Adventures of a Small-Town Mailman, about his experiences as a mail carrier for the Greenbrier Post Office.

“I had all these notes; I didn’t plan to write a book. I found out in middle of November 2009 I had [prostate] cancer and was going to be off for 30 days to have surgery,” he said. Hatfield told his co-workers to start putting together their stories for him. His wife, Suzy, is a substitute mail carrier for the Greenbrier Post Office, and she shared stories for the book, too. It wasn’t until January 2014, Hatfield said, that he started putting the collected stories in book form…..

…“When I first became a part-time carrier, one of the first things I remember as a carrier — and the story’s in the book — I saw a cow in this big pasture having a calf. It looked like she was having trouble,” he said. Hatfield stopped at the home and told the family what he saw.

He went on down the road, turned around and worked his way back the other side of the road, filling mailboxes. “I passed by that same house and the little girl was waiting by the fence excited to tell me they had a new calf, a new addition to the herd,” he said. The family thanked him for letting them know about the birth.

“I shared stories with my family, and they were always listening with interest, and then I start writing them down,” Hatfield said. He said he’d jot a note in a journal to jog his memory, such as “Cow being born.”

“I didn’t really start writing it down till six or eight years ago,” he said.

His wife, Suzy, became a substitute Greenbrier mail carrier in 2001, and she has her share of stories, too, some of which also are in the book. “The route she carries has 830-something boxes, but she only drives 33 miles; she’s stopping a lot more than I am,” Hatfield said.

He said his favorite story in the book is rated PG, and it involves his wife making a pit stop to use the bathroom in a secluded area, and the basset hound who found her.

Although dogs chasing mailmen have been the subject of many a cartoon or joke, Hatfield said he mostly encounters friendly pets.

“I don’t have a problem with any of the dogs on my route,” he said. “Some carriers really aren’t animal lovers. I do carry dog treats; I don’t think we’re supposed to do that. We know our dogs’ names. In the book, there’s 30-40 names.”

Hatfield has learned to keep a camera with him at all times, because he never knows what he’ll see on the rural roads of Faulkner County….