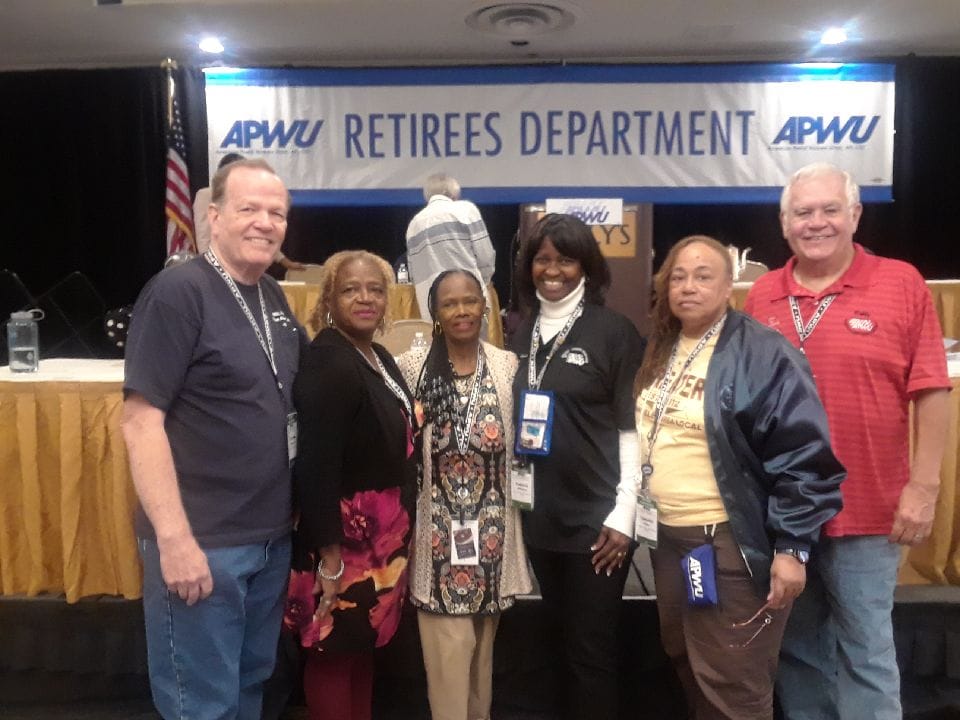 Proud to say all six of us are from the Southwest Coastal Area Local and Greater Los Angeles Area Local and were officers for many years. – Bobby Donelson

Approximately 200 Retirees, the National Retiree Director, and five (5) Regional Delegates attended the All Craft Conference – Retiree Meeting. We came from all parts of the country.

I would like to thank the National APWU for accommodating retirees and making the conference comfortable for retirees. We are some of the oldest members of the APWU, AFL-CIO.

The Retiree Conference began with five (5) hour meeting on Sunday, October 27, 2019, 2 PM – 7 PM. We had approximately 65-70 retiree officers present. Retiree Director Nancy Olumekor scheduled three speakers to address us and they reviewed all the reports chapter and state president had access to and discussed the fiduciary responsibility of retiree officers. The main thing I got from this meeting is the reports we have access and what they meant. The issue of cash paying retiree members being delinquent in dues was a major concern during the 2019 National APWU National Election.

This was the schedule of events:

This took up a lot of time and we were rushed to discuss the Resolutions Submitted. This year the Retiree Delegates had a lot of resolutions to discuss. The issues were:

Items 2, 3, and 4 were all voted down because the Retiree Delegates voted to only submit one constitutional resolution to the National APWU – Voice and Vote based on 1 delegate for every 100 retirees in Local and State Retiree Chapters.  The actual resolution is being referred to the five regional delegates for development. I sent the blow to Dr. Pat Williams our Western Regional Delegate for consideration or for a starting point.

WHEREAS, most American Postal Workers Union Retiree are like all retirees and live on a fixed reduced income, and2019 apwu all

WHEREAS, many American Postal Workers Union Retiree step forward when the union needs assistance or support, and

WHEREAS, a united American Postal Workers Union benefits all APWU Members, therefore be it

Resolved, to amend the American Postal Workers Union Constitution and Bylaws Article 6. Add a new Section 6 and changing current section 6 to Section 7. New section 6 would read: SEC. 6. National Convention local, state, regional affiliates, or organizations voting strength/representation provisions will apply to chartered APWU State and Local Retiree Chapters with the exception that Retiree Chapter’s voting strength/representation will be one (1) for one hundred (100) or fraction thereof.

Any suggestions or comments please contact your Retiree Elected Delegate 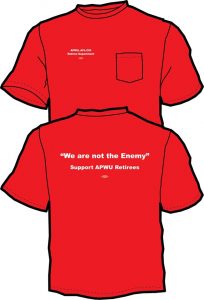 The Red T-Shirts with the slogan “We are not the Enemy” which came out of the 2018 National Convention was a success.

I have paid full dues to the National APWU and Southwest Coastal Area Local since I retired in July of 2003, cost to the retiree in excess of $750.00 annually this year in my case as well $36 annual dues to be a member of the APWU Retiree Department.