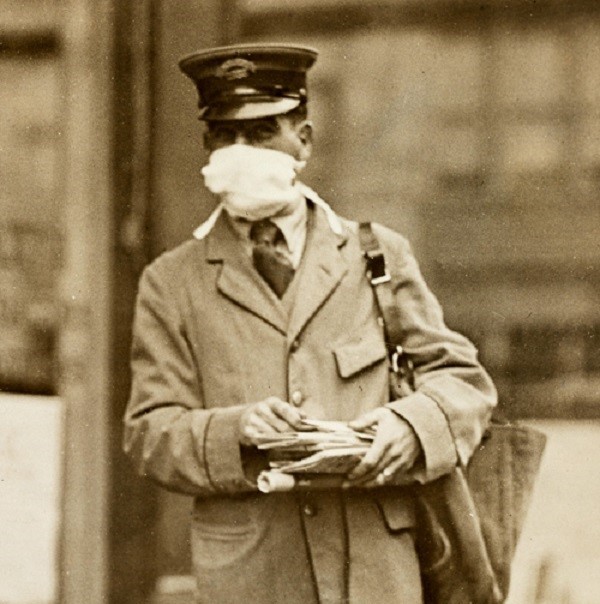 The COVID-19 crisis isn’t the first time the nation’s postal system has risen to the occasion during a national health emergency.

“Letter carriers then and now were on the front lines,” said Jenny Lynch, the Postal Service’s historian.

The 1918-19 flu outbreak was the deadliest pandemic in modern history. An estimated 50 million people died worldwide, including approximately 650,000 in the United States.

Called the “Spanish Flu” because newspapers in Spain printed uncensored coverage of the pandemic, the virus is believed to have originated at an Army training camp in Kansas before traveling with American troops to Europe in spring 1918. In crowded military camps and trenches in war-torn Europe, the virus is thought to have mutated into a deadlier form.

The first cases of the more lethal flu in the United States were reported among returned servicemen in Boston that August. Within weeks, the flu jumped to civilian populations and quickly spread to cities nationwide.

From coast to coast, local and state governments enacted social distancing measures — including closing schools, banning public gatherings and shuttering some businesses — in a desperate attempt to stop the spread of the disease.

Some people were also ordered to wear cloth masks.

Through it all, the U.S. Post Office Department kept the mail moving, although not without challenges.

In Washington, DC, for example, more than 150 postal clerks and carriers fell ill during the first week of October 1918 — the deadliest month.

Washington Postmaster Merritt Chance urged high school boys to work at the Post Office — for as long as schools were closed — to keep operations continuing. A week later, he required all clerks who interacted with the public to wear gauze masks.

In other towns, especially in the West, Post Offices reduced or even suspended service.

In most U.S. cities, the flu peaked between September and November 1918, then weakened in early 1919.

In a 2007 study, researchers from the Centers for Disease Control and Prevention and the University of Michigan’s Center for the History of Medicine found that social distancing saved lives during the pandemic.

Historians like Lynch have also noted the important role that mail has played in keeping people connected during times of crisis.

“The ability to connect can be, quite literally, a lifeline during times of extreme stress,” she said. “Mail enables the exchange of vital supplies and information. Perhaps even more important, it can provide hope, comfort and purpose.”