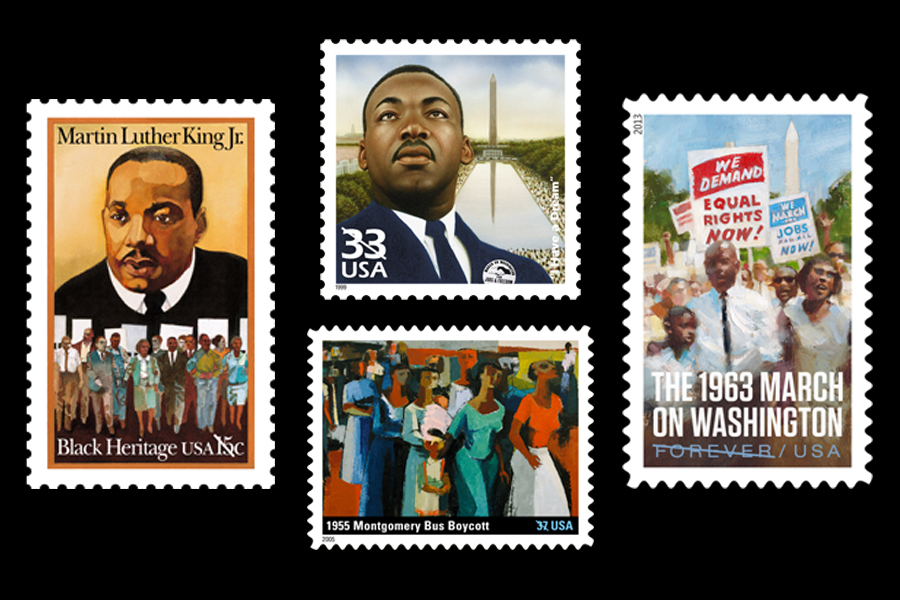 Stamps that honor Martin Luther King Jr. include, clockwise from left, a 1979 Black Heritage stamp, a 1999 Celebrate the Century stamp, the 2013 March on Washington stamp, and Montgomery Bus Boycott, one of 10 To Form a More Perfect Union offerings from 2005.

King (1929-1968) was a Baptist preacher who became a leader in the American civil rights movement. He helped organize the 1963 March on Washington, where he delivered his famous “I Have a Dream” speech, and also helped pave the way for enactment of the Civil Rights Act of 1964 and the Voting Rights Act of 1965.

King received the Nobel Peace Prize in 1964, four years before his assassination.

“Martin Luther King Jr. was a visionary leader who dedicated his life to the principles of equality, freedom and opportunity. We honor his legacy and continue to be inspired by his words and contributions,” said Postmaster General Megan J. Brennan.

USPS has issued several stamps to honor King and his work, including a 1979 Black Heritage stamp and a 2013 release that marked the March on Washington’s 50th anniversary.