What the Primer Includes

This primer explains how the U.S. Postal Service (USPS) works and why it needs reform, and discusses some options for addressing reform issues. GAO provides answers to questions about basic aspects of USPS and postal reform issues in a concise and easy-to-understand format. These answers are based largely on GAO’s prior work.

This primer highlights key issues to help Congress consider the future of USPS, including consideration of the level of postal services the nation requires, the extent to which USPS should be financially self-sustaining, and the most appropriate institutional structure for USPS that best supports changes. USPS’s financial viability has been on GAO’s High-Risk List since 2009. USPS has made efforts to cut costs and adjust its operations to adapt to declining mail volumes. However, the cost savings from these efforts have dwindled in recent years. USPS must meet several statutory requirements and has a wide variety of stakeholders (see figure). Reaching compromise and agreement among stakeholders regarding further changes will be difficult. USPS’s deepening financial problems could put its mission to provide universal postal service at risk, along with the well-being of its retirees and the repayment of its debt. Since 2010, GAO has stated that while USPS needs to cut its costs, congressional leadership and action are essential to restore USPS to financial viability. 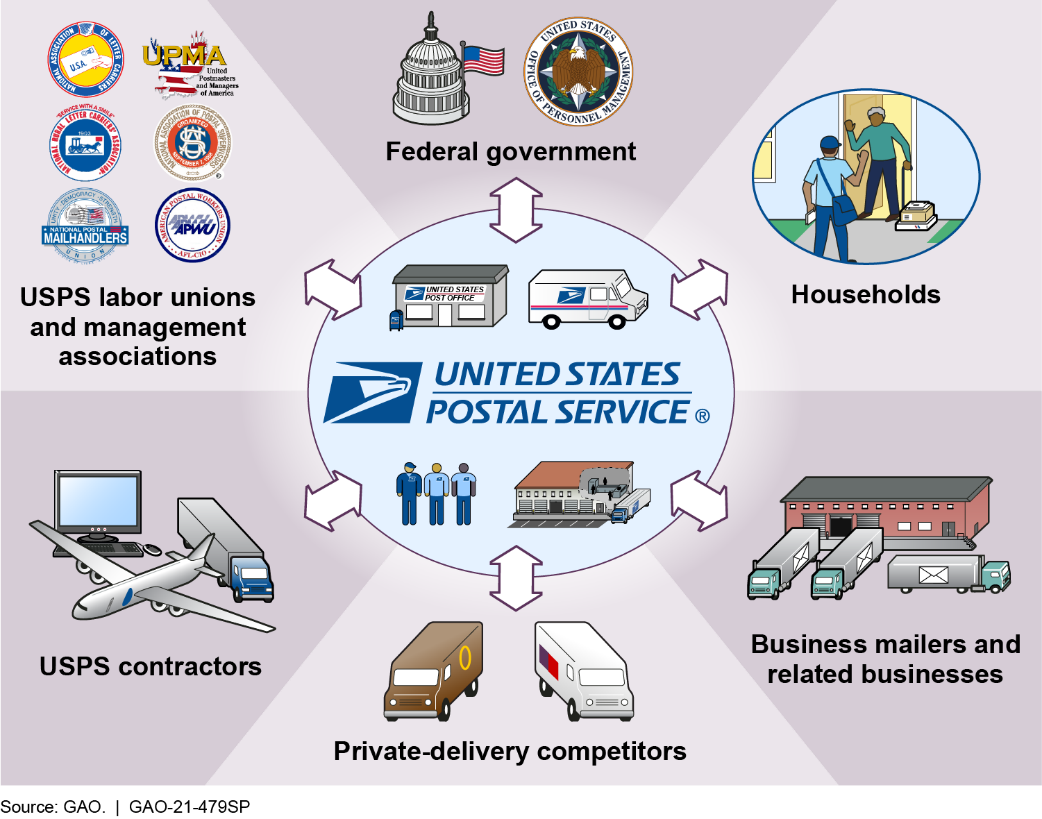 Why GAO Developed This Primer

USPS is the largest postal service in the world, delivering an estimated 49 percent of all mail sent globally and playing a critical role in the nation’s communications and commerce. Congress designed USPS to be a self-sustaining entity that, like a business, would cover its operating costs primarily with revenues from selling certain products and services. However, starting in fiscal year 2007, USPS’s expenses began exceeding its revenue. This has led to total net losses of $87 billion from fiscal years 2007 through 2020, and $188 billion in total unfunded liabilities and debt as of the end of fiscal year 2020.

GAO created this primer to help explain why USPS’s financial condition has deteriorated so dramatically and to discuss some options for addressing the situation. GAO developed the key questions that it addresses here by reviewing relevant GAO reports to identify and summarize key findings and matters for congressional consideration. GAO also reviewed USPS documentation, including reports on costs and revenues, to update information from previous work, where appropriate.

In prior work, GAO has recommended that Congress consider fundamentally reexamining key aspects of postal service in the United States.