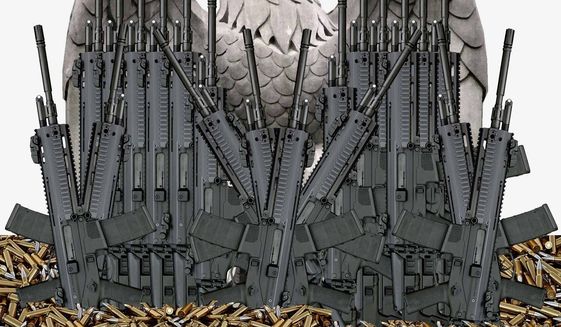 USPS redacted so much information from their procurement orders that the 400 pages of production are virtually worthless to our oversight efforts.

By Adam Andrzejewski – July 5, 2016
Just how many errors have the federal administrative agencies made in the reporting of their guns, ammunition and military-style equipment?

Despite the dirty data and accounting mistakes, our organization at OpenTheBooks.com recently released an oversight report titled “The Militarization of America.” It quantified the escalating size, scope and power of 67 nonmilitary federal agencies, which spent $1.48 billion on guns, ammunition and military-style equipment since 2006. We also found that there are now more federal officers with arrest and firearms power (200,000-plus) than U.S. Marines (182,000).

Here are some of the public policy issues that have come to light because of our oversight report:

While there have been improvements in transparency, such as the 2006 Google Your Government Act, sponsored by Mr. Coburn and then-Sen. Barack Obama, getting hard data on federal weaponry and its authorized users was still much too difficult.

For example, official counts of federal officers with arrest and firearms authority compiled by the Bureau of Justice Statistics haven’t been updated since 2008. This year, a source admitted that even the Department of Justice ignored the voluntary request for update, and more than 80 percent of the agencies didn’t comply with the request, either.

We asked the IRS, Animal Health Inspection Service and even the U.S. Post Office (USPS) for recent gun and ammunition asset inventories and audits. None of the agencies were forthcoming with their gun locker inventories. USPS redacted so much information from their procurement orders that the 400 pages of production are virtually worthless to our oversight efforts.

Citizens should be rightfully concerned about the staggering expense of militarizing the federal bureaucracy. Here’s how we estimated the cost: The EPA spends an average of $216,000 for each of its 200 “special agents” in salary, benefits, training and weaponry each year. Extrapolating the expense across all federal agencies and 200,000 officers yields a potential taxpayer cost of $43 billion.

After grabbing legal power, the feds are amassing firepower. Today, at its hearing, we wish the House Oversight Committee much success holding the agencies accountable. It’s time to institute basic accounting controls and then scale back the federal arsenals.