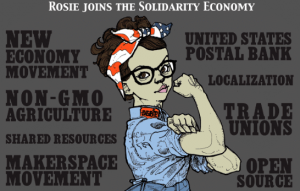 Commonomics USA (formerly BankACT), a leading voice for postal banking since USPS inspector general Dave Williams first proposed it in January 2014, will host a series of conference calls featuring prominent economists and experts on United States Postal Service-based financial services, beginning on Tuesday, February 3, when Dean Baker, American macroeconomist and co-founder of the Center for Economic and Policy Research, will speak on the subject.

Entitled the “Friends of Postal Banking Conference Call Series,” the events will take place on the first and third Tuesday of every month, February through May, according to the Commonomics USA web site. They will begin at 3PM eastern (noon pacific time). The calls are free and open to all interested people, who may register at http://myaccount.maestroconference.com/conference/register/G81CJ6H5NHIMLEE. Attendees can also click “attending” on this Facebook event page to designate their intent to attend the Dean Baker event: https://www.facebook.com/events/339687272901243/.

The series will continue on February 17, when  Mike Leyba, Director of Communications for United for a Fair Economy and author of “State of the Dream 2015: Underbanked & Overcharged” will address the conference call. Then, on March 3,  Mehrsa Baradaran of the University of Georgia Law School and noted author on postal banking, will speak. On April 21,  Sheldon Garon, Professor of History at Princeton University, will discuss postal bank services around the world. On May 5, David C. Williams, USPS Inspector General, OIG published Providing Non-Bank Financial Services for the Underserved in January, 2014, will speak.

“This is an invaluable opportunity–an absolutely free opportunity–to learn about postal banking from the most credible authorities available on the subject,” said Matt Stannard, policy director at Commonomics USA.  Stannard’s organization advocates economic solutions that grow our nation’s common wealth, spotlighting and fighting against privatization. According to the organization’s web site, Commonomics USA aims to “advance economic justice, reclaim the commons, and promote democratic economies through nonpartisan partnerships with America’s public officials, grass roots activists, and the general public.”