Web News Article #: 110-2015
05/21/2015 – A report by the USPS Office of Inspector General (OIG) released May 21 outlines the next steps for implementing postal banking, in which post offices would offer basic financial services – providing affordable banking transactions to every zip code in the US, while strengthening the Postal Service.

The May 21 report titled, “The Road Ahead for Postal Financial Services,” states that expanding and enhancing existing financial services such as money orders, international money transfers, check cashing and bill payments could be accomplished without an act of Congress.

According to the OIG’s “conservative estimate,” this expansion could bring the Postal Service $1.1 billion in annual revenue within five years while serving 68 million Americans who either who don’t have bank accounts or who “rely on expensive services like payday lending and check cashing.” Some refer to these predatory businesses as “alternative financial services;” APWU President Mark Dimondstein calls them “legal loan sharks.”

While highlighting the impact postal banking would have on the financial health of the Postal Service, the OIG also recommends that the USPS focus on the affordability of the services it could provide.

Among the expanded offerings, post offices “could provide ATMs where recipients of government benefits could withdraw funds without paying a fee,” the report says.

Dimondstein praised the idea. “It’s a no-brainer,” he said. “The Inspector General’s report confirms that the Postal Service can act now to provide consumers with affordable financial services while strengthening our trusted national treasure, the public Postal Service.

“We look forward to the day when people can get their checks cashed by their trusted neighborhood window clerk,” he said. 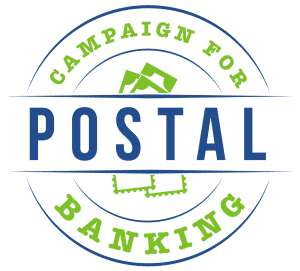 The APWU is a member of the Campaign for Postal Banking, a coalition of consumer, worker, financial reform, economic justice, community, civic, and faith-based groups that is organizing support for the concept. For more information, visit www.CampaignForPostalBanking.org.