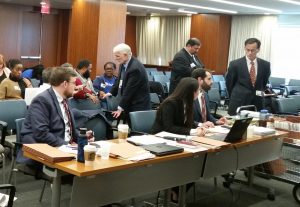 Before the February 24, 2016 NLRB hearing got underway.

05/25/2016 – After nearly a year of procedural wrangling, 10 days of testimony and more than 140 exhibits, the National Labor Relations Board hearing on charges that the Postal Service illegally subcontracted work to Staples ended on May 24.

Region 5 of the NLRB issued a complaint against the Postal Service on June 26, 2015, in response to an “unfair labor practice” charge filed by the APWU. The complaint asked the NLRB to order the USPS to cancel its Approved Shipper deal with Staples and return the work to postal employees.

The hearing, which began in August 2015 and continued in November and February, resumed on May 18. NLRB General Counsel called APWU President Mark Dimondstein as the final witness in its direct case.

The NLRB General Counsel was represented by Daniel Heltzer and Cristina Cora, who worked closely with the APWU to demonstrate that the Postal Service refused to bargain with the union over its decision to contract out work to Staples.

NLRB attorneys cross-examined the USPS witnesses and re-called APWU Manager of Negotiations Support Phil Tabbita, who testified in February, to rebut their testimony.

A ruling by Administrative Law Judge Paul Bogas is not expected for several months.

Many parts of the record and most documents introduced at the hearing remain under “provisional seal,” which prohibits the APWU from sharing the information contained in them.

Dimondstein vowed to fight to make the documents available to union members and the public. “The dirty deal between Staples and the USPS has been shrouded in secrecy from the beginning,” he said. “But the people have a right to know about management’s attempts to privatize their Postal Service.

“Our country deserves public postal services that are provided by well-trained USPS employees who are accountable to the people,” he said.

Click Here to see some of the “Dirty Deal” documents under “provisional seal.”