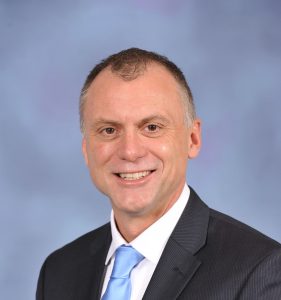 04/06/2016 – Legislative and Political Director John Marcotte has been appointed APWU Health Plan Director by President Mark Dimondstein. Marcotte’s appointment, which was approved by the National Executive Board, is effective April 15, when William Kaczor, the current director, retires.

Marcotte began his postal career at the Lansing Processing and Distribution Center in 1994 as an Electronic Technician.

“I congratulate John Marcotte on assuming his new position as APWU Health Plan Director. I am confident he will bring new, bold vision to these important duties and take them on with high energy and enthusiasm,” Dimondstein said.  “I’m confident that his experience dealing with Congress and government agencies that influence health insurance policy for postal and federal workers will prove to be an asset in this new position.”

As a plan participant, Marcotte said he has a keen understanding of the health insurance needs of our members. “I look forward to growing the APWU Health Plan and making it the plan of choice for even more of our members and their families.  “During my tenure as Legislative and Political Director, we have made many strides for the betterment of the APWU and I want to thank each of you for your assistance in achieving these gains,” he said.

Located near Baltimore, the APWU Health Plan currently has more than 220 employees, whose salary and benefits are funded by the 118,000 postal and federal plan participants.