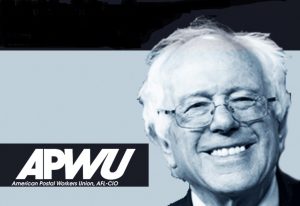 Is the APWU about to endorse Bernie Sanders for president? Did they interview all the presidential candidates or just the one that our national president supports? I keep hearing that Bernie Sanders is the champion of postal issues. No kidding we alert him to our issues and he speaks on our behalf. My guess if we gave the other candidates running for president a heads up on our issues, they would also support us.

If you are wondering why Trump and the GOP don’t attack Bernie Sanders it’s because they welcome him as a candidate. If you wonder why they attack Biden, it’s because he can beat Trump. And there are other good candidates in the race, why is the APWU about repeat history and back someone who can’t win.

I remember Bernie Sanders was sitting in his new cabin in Vermont in the last few months of the 2016 election writing his book. He did limited appearances for Clinton and refused to allow access to his email list. No, I am not a fan, he like Trump is not really a member of the party for which he seeks the nomination. He has made so many wacky promises and like Trump has no idea how to pay for them.

The leadership of the APWU does a disservice to the membership by getting involved in this primary. I know our national president owns or owned property in Vermont and it’s sweet that he has a man crush on Bernie, but there are so many real issues facing the membership and who to support in the Democratic primary is not even in the top ten.

I would ask the membership to hold your executive board accountable for wasting resources and time on supporting Bernie Sanders. Seek out your regional coordinator, craft officers and executive officers and ask hard questions. How many people were personally interviewed, why wasn’t the entire membership polled and why when so many members are suffering do, we waste time on the primary before the first votes are cast.

Our national trusted the membership to send 400,00 letters to the BOG about the next PMG, but couldn’t figure out a way to conduct a national poll with the members on who to support in the primary. Make sense to you?

Note: I know sometimes Randy places these posts on FB, I have left FB until after the election based on their decision to allow false campaign ads on their platform.