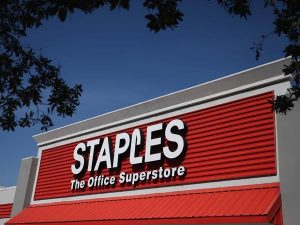 February 4, 2015
UPDATE: The American Postal Workers Union says it “will vigorously oppose” the “monopolistic and unlawful” Staples-Office Depot merger before the U.S. Department of Justice and the Federal Trade Commission. The union says in a statement that the U.S. Postal Service “plans to transfer USPS work to Staples in order to reduce employment and hours of service to the public in neighborhood post offices.” Staples and Office Depot pay lower wages and less benefits than the Postal Service.

EARLIER: In a move expected to accelerate the shutdown of office-supply stores across the U.S., Staples Inc. has agreed to pay stock worth $6.3 billion to acquire rival Office Depot, which last year absorbed the former Office Max chain. The price works out to $11 per Office Depot share, up from $7.60 on Monday (Office Depot shares started rising Tuesday as deal rumors were reported in the financial news).

“Financially this transaction makes sense and is necessary to the longterm health of these two companies,” retail analyst David Strasser told investors for Janney Capital Markets in a report today. Both Staples, which has more than 2,000 U.S. stores, and Office Depot, which has over 1,000, have recently announced store closings as they struggle with online competition from Amazon.com and others. That will accelerate, since roughly half of Office Depot stores are within 5 miles of a Staples.

Strasser expects the merger partners will close 1,000 stores in the next couple of years, slicing $1 billion off the chains’ combined expenses. The shutdowns will also reduce the income of America’s retail landlords by $350 million/year. Strasser estimates the partners will also cut advertising, currently $1 billion/year ($500 million for each of Staples and Office Depot), to about $600 million.