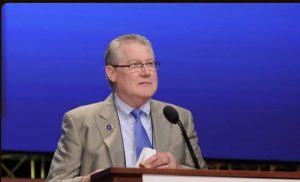 As a member of the Philadelphia BMC Local, I’ve enjoyed the terms and conditions of my employment, such as some of the most liberal annual leave language found in any LMOU, holiday provisions that greatly limit unnecessary involuntary work, and OT and change of schedule protections that rank among some of the best in the country.

While it’s true that no one person makes a great Local, most of the best LMOU language date from the period that Mike Gallagher was the President of the Local. He was the spark that lit the fuse that became one of the best organized Locals in the country. I have the privilege and benefits of being a member of the Local that Mike led.

As a National Arbitration Advocate, I’ve watched NBA Mike Gallagher win some of the most important regional arbitration awards in the country. I’ve seen the many millions of dollars in settlement money distributed among APWU members due to Mike’s ability to get management to the table.

Managers with the choice of facing Gallagher at arbitration, or yielding to Mike’s terms during pre-arbitration settlement negotiations, would settle, often for millions, rather than face certain defeat at arbitration (at least the smart managers did).

I have seen, first hand, respected arbitrator’s written comments about Mike’s skill as an Advocate. Upon his retirement, Arbitrator Carl Stoltenberg wrote that Gallagher was “the best in the business”, with “an unequalled grasp” of the Postal industry. In my 20+ years as an Advocate, I’ve never seen higher praise.

Now that I’m the Maintenance National Business Agent, I work with Regional Coordinator Mike Gallagher on a daily basis. I get to personally see his hard work and dedication to the members we serve. Importantly, I witness the total and complete respect that Postal Service management has for Brother Gallagher. His ability to cut through the Postal Service bureaucracy and get things done is second to none. In these trying times, we need the type of strong, stable leadership that Mike provides. Please join me in supporting Mike Gallagher’s re-election to the position of Eastern Regional Coordinator.