August 30, 2017
The Committee was convened in an unscheduled meeting today to discuss and consider the effects that hurricane Harvey has had and is having on our sisters and brother post office workers and retirees in the affected areas of Texas and Louisiana. 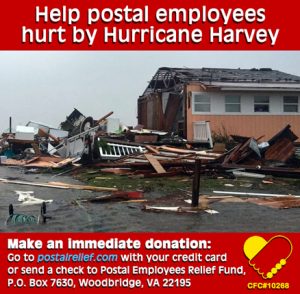 It was noted that the national unions have publicized their reaction to the situation through various means such as email blasts, web site reports, and direct contact with activists throughout the country. An emphasis was placed on seeking monetary contributions to the Postal Employees Relief Fund, or PERF. Apart from this vehicle, several public relief and charity groups, such as the American Red Cross, are also seeking cash contributions. As has been the case recently, despicable scammers are out in full force attempting to siphon off funding from legitimate agencies into their own pockets.

On the local scene, various initiatives were discussed. However, since the full Committee was not able to meet on such short notice, final consensus was not possible. Some of the items discussed were: direct contributions to sister Locals who have been impacted by the storm; and supporting innovative initiatives directly reaching individual affected colleagues in a variety of ways.

The Committee’s next scheduled meeting is Tuesday, September 26, where these issues will be further discussed. In the meantime, the various national unions are appealing directly to the rank and file and retirees seeking individual contributions. While we are all stretched financially, everyone can spare a few dollars for this most worthy cause. The Committee urges maximum support. Full particulars how to contribute can be found in each of the union’s official publications and web sites.