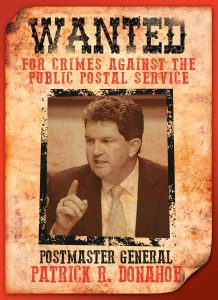 January 15, 2015
PMG Pat Donahoe is receiving lots of praise as he prepares to retire Feb. 1 after 39 years with the Postal Service.

Sen. Thomas Carper (D-DE), who recently served as chairman of a Senate committee that oversees postal matters, paid tribute to the PMG in a lengthy statement in the Congressional Record Jan. 13.
“During his 4-year tenure as Postmaster General, Pat proved himself to be a dedicated public servant, a strong leader, and an innovative chief executive with the willingness to make tough calls and hard decisions,” Carper stated.

The Washington Post, in a Jan. 13 editorial, praised the PMG’s recent farewell speech.
“Any time an official retires after devoting 40 years of honorable public service to a single institution, it’s an occasion for thanks and respect. And it’s an occasion to listen carefully to what that veteran has to say upon his departure,” the editorial stated.

USPS employees are weighing in too.

In a recent email to Link, San Mateo, CA, Computer Systems Analyst Rolanda Yang wrote,
“Thanks to PMG Pat Donahoe for leading the Postal Service and establishing a bright future for retirees and the next generation. May the years ahead bring him great joy and relaxation.”

One thought on “USPS: ‘A dedicated public servant’ – PMG receives praise before his retirement”