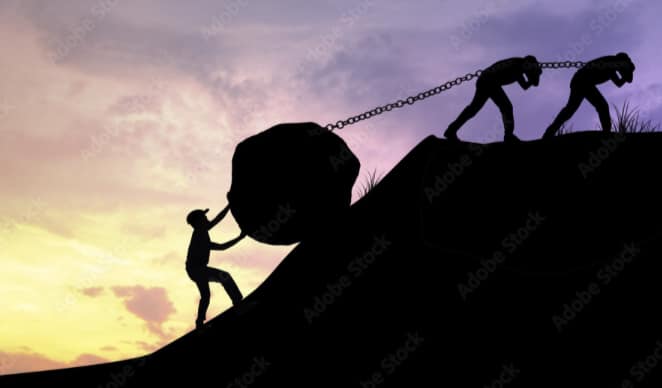 The final push is on – Help pull in any remaining votes to ELECT JOHN L. MARCOTTE, as our new APWU PRESIDENT – a MEMBERS’ PRESIDENT.

We cannot afford another week let alone another 3 year term under our current president. John is a proven, experienced, effective, honest leader with grit, keen abilities and never quit determination. He has laid everything he has on the line so we can finally have a president who will actually fight for us – but that won’t happen unless we get our ballots off the dining room table and VOTE for John.

Maybe you are thinking about not voting because you feel abandoned and have become disillusioned and apathetic – DON’T lose faith – VOTE for John.

Don’t let our current president’s self-proclaimed ‘winning’ record mislead you – it’s filled with spin, half-truths, falsehoods – not so winning. Even his so called ‘team’ is not really a ‘team’ at best it’s a ticket. There are many on his so called ‘team’ who are only running with him to avoid his wrath and any opposition he would have put up against them if they chose not to join his ‘team’ – that’s not solidarity that’s survival. No other president has ever required their running mates to sign a letter of support except him – why because even he knows they don’t support him so he uses it to keep them silent. If you want truth and honesty from our president – VOTE for John, a president we can trust.

Our present president’s elaborate campaign video just more spin filled with clips of grandiose speeches and remarks – all of which ring hallow given his harmful actions, his actual record, his refusal to dump DeJoy, and his inability to bring any impactful relief to our members’ struggles after 9 long years as president. More reasons to VOTE for John.

Our current leader’s shiny, expensive full mailings that cost well over $100k each and his other campaign propaganda also pricey only proves he has deep pockets but that doesn’t change his real record nor does it make him a good president – a shiny penny is still just a penny.

We should elect leaders based on merit, based on character, based on results not bankrolls. We don’t want a president who takes the easy road by using buckets of money to influence our votes. What we need and what we will have in John is an exceptionally qualified, effective new president who will lead us off the dangerous road our now president has put us on. We will have a new president who actually respects all members; who will fight to protect our benefits and job security instead of trading them away and bringing harm to our front door.

There is no doubt that John is the far superior candidate and with our support he is destined to be a far better president who will serve us well. So go get those ballots – go get those votes to elect a leader we deserve. VOTE for John L. MARCOTTE, a MEMBERS’ PRESIDENT.

2 thoughts on “The final push is on: ELECT JOHN L. MARCOTTE, as our new APWU PRESIDENT – a MEMBERS’ PRESIDENT”