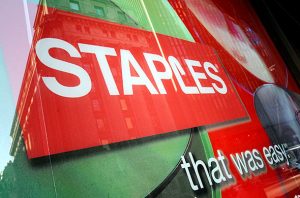 Staples continues to see weak sales and traffic to its giant retail stores in the U.S.

No wonder Staples is investing in lower ink and toner prices in the wake of its failed bid for Office Depot.

The company’s stores could really use the traffic. The office supplies retailer reported Wednesday that same-store sales at its more than 1,600 stores in the U.S. and Canada fell 4% in the first quarter. Store traffic and average order size each declined 2%. Online sales rose a mediocre 1%.

Sales were weak in business machines, technology accessories, computers and mobile items, and ink and toner. On the plus side, Staples had some success selling furniture, office supplies, facilities supplies, and copy and print products. Staples’ first-quarter earnings, adjusted for one-time items, clocked in at 17 cents a share vs. Wall Street forecasts for 16 cents. Total sales of $5.1 billion matched estimates.

Staples can’t blame tough year-ago sales comparisons for lackluster trends at its North American stores — in last year’s first quarter, same-store sales fell 5% due to a 3% decline in average order size and a 2% drop in traffic. The continued sluggish results at its stores underscores why Staples fought hard to win Office Depot, which would have boosted operating profit through greater scale and the closure of underperforming stores. Instead, Staples has promised to lower prices on office supplies in an effort to drive new business and better compete with Amazon and Walmart.

Nevertheless, Staples did its best to put a positive spin on the results.

“We delivered a solid first quarter and we made good progress on our critical priorities,” said Ron Sargent, Staples’ Chairman and CEO, in a statement, adding, “We grew sales in key categories beyond office supplies, drove growth in our mid-market contract business, and improved customer conversion in stores and online.”

Source: Staples May Have Beat on Earnings but Its Store Business Remains in Pretty Awful Shape – TheStreet