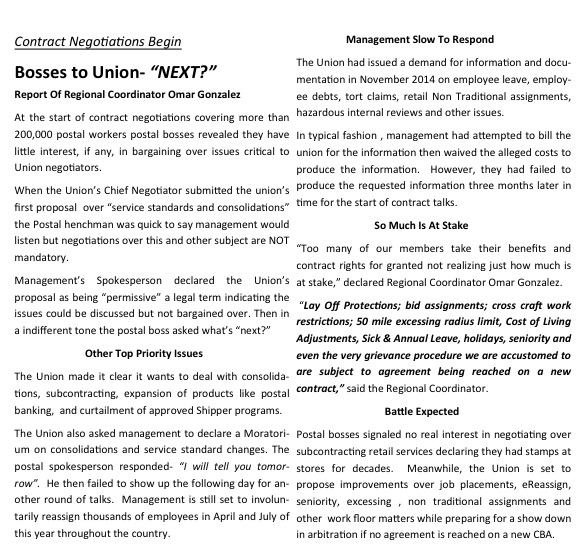 APWU Western Region Coordinator Omar Gonzalez released the above information from the first collective bargaining session with the USPS. The session was attended by negotiators and officers for USPS and APWU. Photographers, hotel workers, guests and others were also present.  As always, Omar does a great job in keeping the membership informed and engaged.

President Mark Dimondstein was incensed by Omar’s release of the information in his report, both in content and in tone. President Dimondstein claims this is a misguided release of information with regards to critical negotiations. He also claims its impossible to have viable bargaining sessions by either side if information of this sort is publicly disseminated.

It would appear that it would be in the best interests of the membership if progress on the negotiations were released to the membership. However, President Dimondstein did not make clear, at least to the entire executive board, what the actual ground rules were regarding disclosure of the proceedings. Originally, his complaint was that a photo was inappropriately released but it seems to be a pretext for withholding all of the information Omar shared.

It seems that Omar was sincere in his efforts to inform the rank and file but it was perceived by President Dimondstein as a self-aggrandizing move by Omar for whatever reasons.

President Dimondstein claims to have taken steps to clarify and rectify the “problem” by defining what the base line rules will be.

I quote the following from Mark Dimondstein:

“I, along with the APWU leadership, the Negotiating Committee and the National Contract Campaign Committee, am committed to sharing the progress of negotiations with the membership. We will do so in a responsible and timely manner.”

One thought on “Regarding ongoing APWU contract negotiations…”