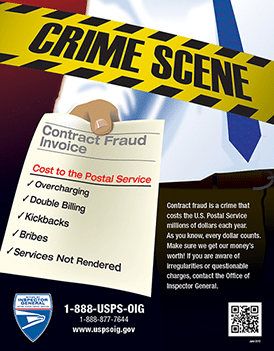 The OIG finds fault with both the leasing deals and the sales of postal property, and it recommends terminating the contract with CBRE. The OIG has also turned several cases over to the OIG’s Office of Investigations to determine if laws have been broken.

The possibility that illegalities occurred involves both the lease negotiations and sales. The OIG examined about 4,700 leases that had been negotiated by CBRE and found 57 where there was a huge rate increase — 200 percent or more than the previous lease rate. Considering that the average increase was about 8 percent, that looks suspicious.

The OIG also found many cases where the lessors said that CBRE was including commission fees in rents paid by the Postal Service, which is contrary to the contract, so this matter has also been referred to the Office of Investigations.

Finally, in the case of several property sales, the OIG found potential relationships between the buyer and CBRE. Those cases have been referred to the Office of Investigations as well.

Given these and many other problems in the arrangement with CBRE, the OIG has recommended that the Postal Service terminate the current contract with CBRE and “recompete” it, i.e., put it out for bid again with a new “request for proposals.”

The OIG leaves it to the Postal Service to decide whether the new contract should be with CBRE, another contractor, or a group of contractors (the GSA’s model) — or if Postal Service personnel should do more of the work (as in years past). Whatever happens, says the OIG, “the idea of terminating the current contract is to ensure that future lease and sale negotiations are done with the Postal Service’s best interest in mind.”

The Postal Service has already rejected the idea of terminating the CBRE contract. In his letter responding to a draft of the OIG’s report, Mr. Tom Samra, USPS Vice President of Facilities, says that the Postal Service has hired a consultant to evaluate the leasing program with CBRE against industry best practices.

Pending review of the consultant’s report, Mr. Samra says that the Postal Service has insufficient personnel to manage all the lease renewals. Besides, Mr. Samra says in so many words, he’s not convinced that CBRE is doing anything wrong.