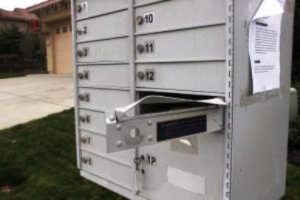 According to Lisa Miller-Hobbs, a 20-year Folsom resident, the cluster mail boxes located on Stockman Circle were broken into Jan. 2. Miller-Hobbs and her husband were told the mailboxes would be repaired within a few weeks and that they would have to pick up their mail at the post office in the meantime.

This is Miller-Hobbs’ second incident with mail theft, and both she and her husband have been victims of identity theft, as well.

“It only takes a few seconds with a large crow bar to pop open these cluster type mailboxes,” Miller-Hobbs said. “If more secure receptacles were required by city code, then maybe the citizens of Folsom wouldn’t be victim to the same crime time after time. … (They) are either blissfully unaware that they are endangering the personal security of their citizens/homeowners/customers or they just don’t care.”