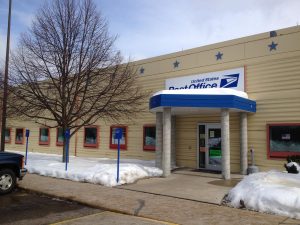 By Rebecca Thiele – March 21, 2015
You might have noticed that your letters and bills aren’t reaching their destinations as fast as they used to. That’s because the United States Postal Service changed its delivery standards in January. It now takes two days for an average First Class letter to arrive instead of one.

In another cost-cutting move, USPS plans to close 82 mail processing plants by the end of this year—including the one in Oshtemo Township.

Rod Holcomb of Kalamazoo maintains the machines that sort the mail at the plant. Holcomb came to the Oshtemo Township plant seven years ago after getting laid off at Upjohn. When the postal factory shuts down on April 18th, he’ll have to look for work again.

Holcomb says he’s applied for several jobs in the area, but hasn’t gotten any bites.

“I think because of my age I’m not getting many responses, which I think I would when I was younger. Because you know with 25, 30 years’ experience usually they would take you,” he says. “And now with my 40 years of experience you’d think that with a great background, good work history…I’m not getting any responses. So I’m not going to have a job.”

To be clear, USPS has offered Holcomb and more than 150 of his co-workers positions at other facilities in the state. But unless Holcomb was willing to commute, he’d likely have to move. The nearest plant is in Grand Rapids. That’s the one that will sort all of Kalamazoo’s mail starting in mid-April.