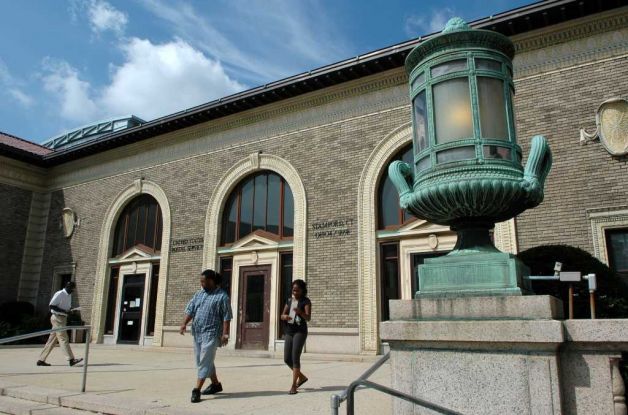 By Elizabeth Kim – March 5, 2015
STAMFORD — A legal battle spearheaded by preservationists to prevent the redevelopment of the city’s downtown historic post office was dealt another defeat this week after the Postal Regulatory Commission dismissed their complaint over the sale and closure of the Atlantic Street post office.

In its decision issued late Wednesday, the commission said the complaint filed by the Center for Art and Mindfulness and Norton Hazel, a Stamford business owner, was out of its jurisdiction.  “The commission has previously determined that the sale of real property does not qualify as a “service” subject to the commission’s review,” the decision said.

The complainants, who had tried to buy the 1916 post office building, accused the U.S. Postal Service of failing to negotiate in good faith and accepting a lower bid with more lenient terms from the buyer, a New York developer. 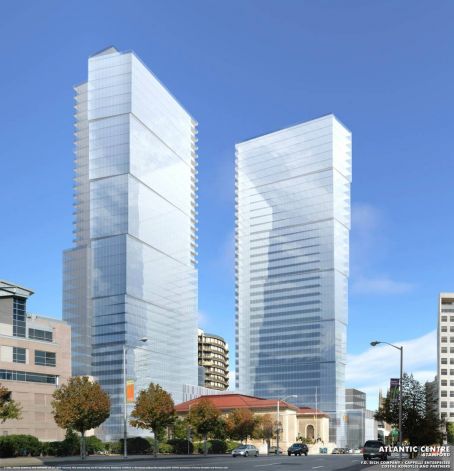 An artist rendering of one of the proposed Atlantic Centre development possibilities, at the intersection of Atlantic Street and Tresser Boulevard.

This is not the first setback for the preservationists. In November, a U.S. District Court dismissed their effort to halt the sale. Shortly after the ruling, Louis Cappelli, a developer based in White Plains, bought the post office for $4.3 million. Cappelli, who was one of the developers of Trump Parc, a high-rise condo on Broad Street, has an approved plan to construct two apartment buildings consisting of 650 units of housing on two sites surrounding the post office. Representatives for Cappelli have indicated an interest in turning the post office into a commercial space, such a restaurant, and have presented plans in which only the back portion, which was built in 1939, would be demolished. Earlier plans considered razing it.

On Thursday, Drew Backstrand, the lawyer for both plaintiffs, expressed his disappointment with the commission’s decision.

“We feel the opinion is wrong,” he said.

Backstrand said the group intends to appeal the decision. He said the members may also try to solicit interest from the National Trust for Historic Preservation, which recently joined the city of Berkeley, Calif., in its fight to save a post office in its downtown.

“The way the postal service is handling our national historic structures and selling them to developers is just deplorable,” he said.

via Fight to save Stamford post office suffers another setback – StamfordAdvocate.