By A. Woodson and Sandy English
July 2, 2016
The American Postal Workers Union (APWU) has announced that a contract for over 200,000 workers may be announced as early as mid-July. A final arbitration session of a committee including a union representative, a United States Postal Service (USPS) management representative and a third, “neutral” arbiter, Stephen B. Goldberg, took place on May 4. Hearings on the contract began in February.

There is every reason to believe that the new agreement will be another multi-tier, takeaway contract. The USPS has proposed a third, lower pay tier for new workers and is seeking to accelerate the process of transforming the postal workforce into low-wage, casual labor. 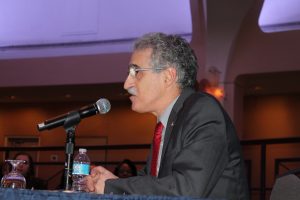 In a speech to the arbitration panel in February, APWU President Mark Dimondstein noted that management is seeking to “expand rather than eliminate and reduce the non-career work force.” In a warning to the USPS that such a move could lead to unrest by postal workers he noted that the “two-tier wage structure in the auto industry was the key issue of the recent [October and November] negotiations of the UAW and the big three auto companies. It was the key demand of the rank-and-file autoworkers—and had it not been satisfactorily addressed in bargaining, would have indeed led to strikes this past year.” Dimondstein also warned that workers are disturbed that management has proposed the elimination of the Cost of Living Adjustment (COLA).

These admonitions are motivated by a deep-seated fear within the APWU bureaucracy of a rebellion by the rank-and-file, which was, no doubt, a factor that lead the union to endorse the candidacy of Vermont Senator Bernie Sanders for the Democratic Party presidential nomination.

Postal workers, and indeed the whole US Postal Service, have been under constant assault for years. The 2010-2015 contract froze wages for the first two years and imposed a 30 percent cut in health care. The first two cost of living increases were cancelled, and the third and fourth were deferred. This contract created a second tier of workers, and cut the top pay by five to eight steps. In the old contract, full-time work was redefined as 30 hours a week, and the non-career workforce in the APWU was expanded to 30,000 workers. According to government figures that contract slashed postal clerks’ compensation by $4 billion.

The USPS has received no federal funding since the 1980s and has shed more than 300,000 jobs since 1999, despite the formal prohibition of layoffs in union contracts.

In 2015, 82 postal facilities were shut with the loss of 15,000 jobs. The Postal Service had previously shut down 143 processing facilities under a special five-year program, eliminated 3,800 delivery routes and reduced operating hours at 9,700 post offices over the past three years. Since 2007, 22,000 city delivery routes have been reduced or eliminated.

The union, which has collaborated with the USPS in all of the attacks on its own members and the public more broadly, is now doing everything it can to implement a further round of cutbacks. It has said little or nothing about the actual content of the arbitration proceedings and has ruled out the possibility of a strike.

The imposition of a likely concessionary contract on postal workers follows the ratification of a sellout agreement by Verizon workers, whose seven-week strike was isolated and betrayed by the Communications Workers of America.

In his speech to the arbitration panel Dimondstein in February conceded that the vote for the 2010 contract “was carried out in a rapid fashion with little time for digesting, debating and reflecting on the massive changes agreed to by the parties. Furthermore, the vote took place in a climate of uncertainty, confusion and fear.” Workers should expect similar tactics by the union to force through this year’s arbitration settlement.