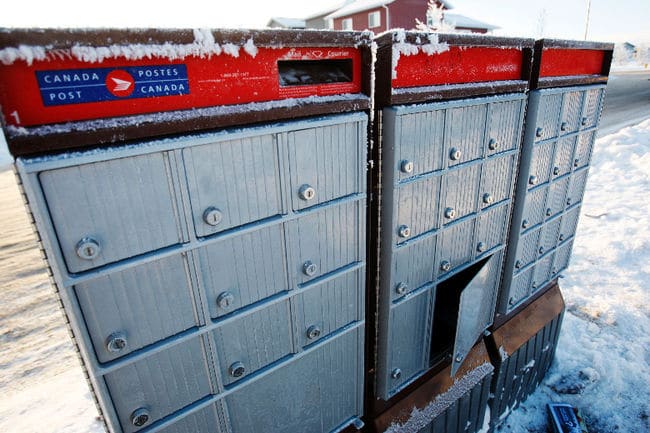 The parcel compartment of a community mailbox sits ajar on 75A Street in the Westpointe neighbourhood in Grande Prairie in December, 2014.

By Debora Van Brenk – January 25, 2015
Little boxes — and plenty of them.
Close enough to walk to — but not on our front lawns, if you please.

If Londoners must give up door-to-door mail delivery in favour of communal boxes, they’re making clear how big the boxes should be and where they should be installed.

Londoners so far have shown a “strong preference” for smaller boxes, clustered close to their homes, said Canada Post spokesperson John Hamilton. “People want to walk to the mailbox. They want it in their neighbourhood.”

About 42,000 London households in the Medway, Masonville, Stoneybrook, Huron Heights and Argyle neighbourhoods will lose home mail delivery by this autumn as Canada Post retools its services to stanch its flow of red ink.

In its place will be a series of community boxes.

Canada Post is just finishing crunching responses to surveys it mailed to affected London homes as it prepares to map out locations for each box.

Hamilton said it looks as if Londoners prefer a few boxes on each of several neighbourhood sites — with mail slots for about 50 homes at each location — rather than subdivision mega-box sites with mail for 200 or more homes. That will mean more, but smaller boxes for most Londoners.

“Ultimately, with every neighbourhood being a little bit different, there’s not one cookie-cutter approach,” Hamilton said.

Canada Post officials are working with city hall staff to find box locations that are safe, convenient and accessible.

Then Canada Post will go door-knocking to notify and consult with residents living on properties adjacent to where those boxes will go, Hamilton said.

Other neighbours will then be notified by mail and given an opportunity to suggest other locations or raise concerns.

Hamilton said installations will take place as early as summer, with boxes in use by autumn.

At least one community representative says the process could be improved with more face-to-face consultation.

“If Canada Post came to a community meeting and said, ‘Here are our choices, you people know your community best — where do you think it should go?’ …then people will feel better about what’s happening,” Levin said.

Even if not everyone agrees with the plan, “People would have the sense that they’re being listened to and are getting a reasonable explanation.”

He contrasted Canadians’ acceptance of the service reduction with the outcry south of the border that reversed a U.S. Postal Service plan to cut delivery to five days a week from the current six days. “People are certainly going to be accepting of it because that’s the Canadian way,” Levin said.

Many, though, continue to have concerns that seniors and people with disabilities will have difficulty getting to the boxes, particularly in winter.

Rural areas will continue to receive mail delivery to the end of their driveways.

Two-thirds of Canadian residences have never had door-to-door service because they already have community mailboxes or have mail delivered to communal boxes in apartments, condos or in small-town post-offices, Hamilton said.

Though parcel service is a growing business for the Crown corporation, lettermail deliveries — and Canada Post revenue — have plummeted in recent years as more Canadians use electronic mail.