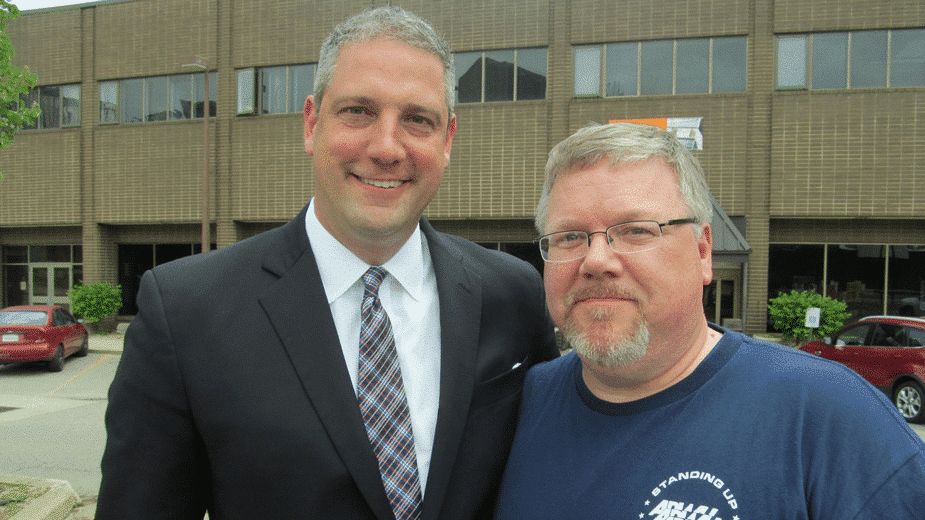 U.S. Rep. Tim Ryan and James Varner, president of Local 443 of the American Postal Workers Union at rally for keeping the processing center open (May 2015)

The center, located at 99 S. Walnut St., was supposed to close in July, but the closure was postponed in May. In July, the closure year was bumped to 2016, and USPS still was holding vacant jobs for affected employees.

A recent memo sent to Varner and other union leaders says that’s no longer the case.

“What this memo did was say that they could go ahead and fill these jobs,” Varner said.

USPS is no longer keeping vacant positions from being filled due to the delayed consolidation at the Youngstown center, a spokesman confirmed Friday.

In 2012 and 2013, the postal service consolidated 141 mail-processing centers and saved about $900 million annually.

USPS wanted to make sure the transition was as seamless as possible for customers, which is why the consolidation was postponed. But the plan to consolidate the Youngstown plant into Cleveland’s hasn’t changed.

In July, USPS said it was withholding filling job vacancies that are affected by the 2016 consolidation, opting instead to pay overtime to meet the workload.

Varner told The Vindicator he wanted to see those holds removed so staffing levels could keep up with the extra work.

“We believe it should have occurred back in July, back when they announced that the plant wasn’t going to close,” he said of removing the job holdings. “The membership is cautiously optimistic about our future here.”

The Youngstown plant is now processing more mail than Varner has seen during his time there.

“Right now, Cleveland is very dependent on us getting their mail done,” he said. “It’s just busy.”

Some bulk-mail processing was temporarily shifted to Youngstown in May 2015, a USPS spokesman said.

Varner hopes the closing will be canceled instead of deferred. There’s no set time for closing the plant.

“The new implementation date will be announced by the postal service at least 90 days before it takes effect,” said David Van Allen, USPS spokesman.