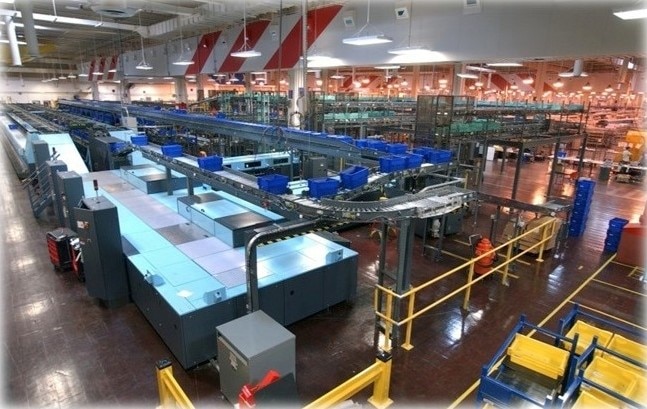 By D. Eadward Tree – January 11, 2017
More than seven years after it began rolling out, the billion-dollar system that was supposed to revolutionize how publications and other flat mail are handled is still making the U.S. Postal Service less, not more, efficient. In fact, the Flats Sequencing System’s performance, already well below plan, declined even further last year, according to a recent USPS report.

Publishers have been shielded from footing the bill for the FSS fiasco – so far. But goings-on in Washington threaten to pierce that sanctuary. 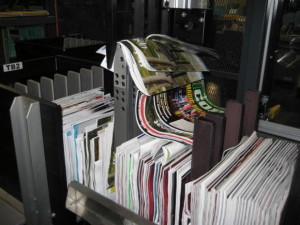 Flyouts in an FSS machine

Buried in a USPS report (excerpted and explained further on the Dead Tree Edition blog) issued just before New Year’s were the latest ugly facts: FSS throughputs declined 6% last year, and the proportion of FSS mail that was sorted on older equipment or manually rose from 40% to 43%. “Mail Pieces At-Risk” (Postalspeak for really bad screw-ups, like jammed machines and ejected magazines) also rose 6%, affecting 1 of every 18 magazines, catalogs, and retail flyers.

Previously, postal officials have blamed declining mail volumes and flimsy mail pieces for the poor performance. Neither of those issues are going away.

Another recent USPS report argued that it will just take more time: “The Postal Service’s experience with the FSS is in its relative infancy, and the Postal Service is still learning about which operational flows will minimize the cost of FSS processing.”

That “infant,” however, is old enough to attend elementary school and still shows no signs of ever being able to walk. 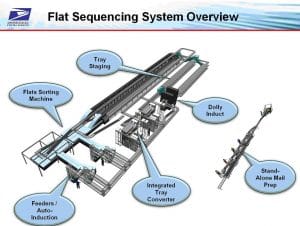 With an investment of $1.3 billion to install 100 football-field-sized machines, FSS’s Phase I was supposed to save the agency about $600 million annually by sequencing flat mail into walk sequence instead of letter carriers doing that manually. Wisely, postal officials stopped talking about Phase II several years ago, so only about 30% of the nation’s flat mail goes through FSS facilities.

The Postal Service’s cost of handling FSS flats was supposed to be even less than the cost of handling publications that are in carrier-route bundles, which require minimal handling until they reach the letter carrier. But with machine throughputs running 35% below plan, postal officials acknowledge that the additional costs of FSS sortation are greater than the savings from letter carriers not having to sort copies that are in carrier-route bundles.

One thought on “Will Publishers Pay for the USPS’s FSS Fiasco?”