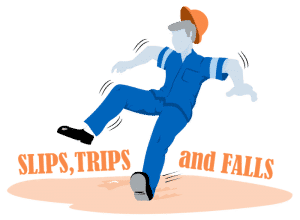 Every so often as I walk down the halls of the BLS headquarters building in Washington, D.C., I notice a few drips of coffee or water on our otherwise shiny floors. My first reaction is to stoop down and wipe up the spill, or to grab one of the handy “caution” signs we have around the building, to avoid a slip or fall. But my mind quickly turns to our data on slips and falls from our Survey of Occupational Injuries and Illnesses, or SOII. Over the past several weeks, we have issued two releases highlighting the latest results on workplace injuries and illnesses. These are part of our occupational safety and health statistics program that also includes data on fatal workplace injuries. Today I want to tell you a little bit about the SOII program and the data we provide.

Did you know that private sector employers identified nearly 3 million workplace injuries and illnesses last year? Incidents recorded by employers run the gamut from minor cuts or bruises—those needing more than just first aid—to severe incidents such as amputations. About a quarter of a million workplaces are asked to keep track of their occupational injuries and illnesses over the year and report them to BLS; employers follow definitions established by the Occupational Safety and Health Administration (OSHA). BLS tabulates these data and reports them in summary form; as with all BLS data, we hold information about individual employers in confidence.

Following OSHA rules, employers indicate the severity of a workplace injury or illness based on the outcome of an incident. Those that result in employees being out of work for a day or more are considered the most severe; less severe cases result in some limitation in job duties (for example, put on “light duty”). The least severe cases result in no time off or restriction. Of the nearly 3 million private sector cases identified in 2014, about one in three resulted in the employee being away from work for at least one day.

Workplace injuries and illnesses can happen anywhere. In fact, the three industries with the greatest number of cases in 2014 are diverse: private medical and surgical hospitals (222,300 cases), local government elementary and secondary schools (217,300 cases), and restaurants (192,100 cases). Of course, some of these industries have more injuries and illnesses because they employ a lot of workers. Taking into account employment and the number of hours worked by employees, industries with high injury and illness rates include nursing facilities and police/fire/corrections organizations.

Once we release these data, we turn our focus to the most severe cases—those that result in employees being out of work for a day or more. People often ask us for more details about these cases—which occupations, what is the nature of injury, what event led to the injury, do injuries vary by age? Our second release covers the case circumstances (what happened) and demographic details (to whom) for these most severe cases. Here are a few highlights from our 2014 data: 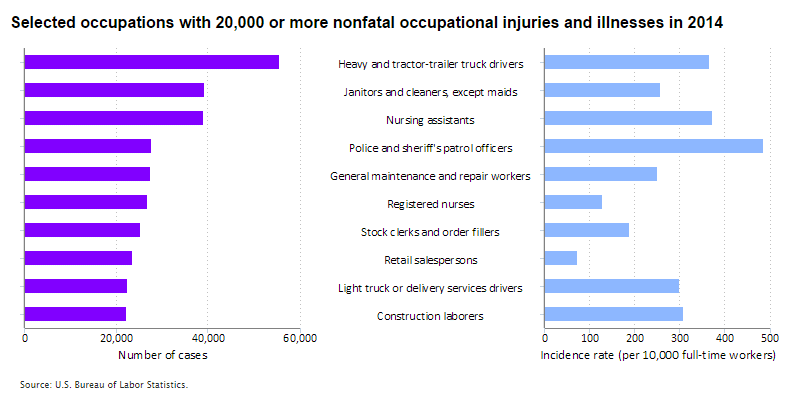 So the next time you see that spill in the hallway, make sure it gets taken care of before you become a BLS statistic.

Source: Why This Counts: Slips, Trips, and Falls in the Workplace |