Like most of my fellow USPS employees, I want and am dedicated to keeping the USPS a successful and financially viable American Institution that provides the most cost-effective communication and universal service to all Americans, just as our Founding Fathers established and intended the Post Office to remain.

And like many of my fellow USPS employees, I was especially alarmed and troubled about the prospect of being forced into Medicare as a compromise provision of H.R. 756.

Also like some, I found it suspicious that all four Postal Unions would agree to these terms because it appeared to me as if they were selling us out. So I called President Dimondstein and was fortunate enough to be able to speak to him directly for a few minutes about this legislative measure.

The first important thing I learned is that if H.R. 756 does become law in its current form, we will NOT lose our Federal Employees Health Benefits (FEHB) plans. Medicare will only become our primary health insurance at age 65 and our FEHB insurance will become our secondary insurance coverage. In most cases we will be 100% covered for all medical expenses, including out of pocket costs and co-pays if we chose to keep our FEHB plan.

President Dimondstein explained the answer depends on how healthy you remain and how much or little healthcare you will require. He pointed out that only if you never need or receive any medical services, then it could cost you perhaps as much as $134 per month more if you keep an FEHB plan, assuming other factors don’t lower our secondary FEHB plan costs. Some of those factors that could lower our costs include postal workers being placed in a separate health insurance rate calculation group. Postal workers are overall a heathier than the rest of the federal employee pool so our rates should drop accordingly.

But the real world practical answer to my question about H. R. 756 increasing our health care costs at age 65 includes the fact that Medicare in conjunction with an FEHB plan will eliminate our out of pocket expenses. In other words, the more medical treatment you get, the more you save in out of pocket costs, copays and everything that is not fully covered by our current FEHB insurance plans. You probably know how fast those can add up for just routine medical visits. And consider that the older we get, the more likely we will have health issues that will require medical treatment as opposed to our younger years we enjoy at the peak of our health. And God forbid any of us suffer a catastrophic illness or accident without the combination of Medicare and an FEHB plan. On a fixed budget, unexpected and unpredictable medical costs can be financially devastating.

The second most important thing I learned is that approximately 80% of our APWU Retirees have already opted in to Medicare when they reached age 65.  80% is a significant percentage, a majority opinion that should not be ignored.

The third most important thing I learned is that many of the 20% who did not opt in during the seven month window to sign up for Medicare when you are about to reach age 65, regret not doing so and can’t afford to pay the higher penalty rates now for having failing to sign up during their seven month sign up window. These penalty rates would be waived by H. R. 756 for those who missed out on the Medicare and are regretting it now.

The fourth important thing I learned is the reason some 80% of our Membership opt in to Medicare and many of the some 20% who didn’t wish they had, is because it is not only a good deal, but combined with our Federal Employees Health Benefits (FEHB) plans, is probably the very best “over-insured” health insurance available to anyone in the USA, which makes it the best value combination by far. But you should ask the retirees you know to verify this is all true.

And the fifth and most important thing I learned is knowing all of this, I too will opt into Medicare as soon as I am eligible, no matter what the final outcome of H. R. 756 turns out to be. And the odds are over 4:1 that when given the choice, you will too.

President Dimondstein also pointed out that at this point in time, H. R. 756 is only a House Resolution. If it passes the House, it will still need to pass the Senate before it could ever reach President Trump and potentially be signed into law. As a House Resolution, it is still subject to be changed and the Senate version will be at least a little different. And if it gets that far, the final bill is also subject to changed from the House and Senate versions. If at any point H. R. 756 becomes detrimental, President Dimondstein will of course drop his support of it.

I had a few questions I asked President Dimondstein other Members had asked me. He said he wanted to create a Q&A guide for H. R. 756 that would hopefully answer the most common questions and concerns. He doesn’t have time to surf the web so I volunteered to gather as many questions as I can on social media and submit them to him in few days for his consideration for inclusion in the Q&A. The 21cpw.com forum and 21cpw Facebook group page are excellent gathering points for you to post your questions, concerns and discussion about H. R. 756 or any other postal topic. I will gather and pass on any questions and concerns posted there.

Unfortunately President Dimondstein’s time was limited so I was not able to pose the following scenario to get his assessment, opinion and comments:

Some of you remember that the USPS maxed out its $15 billion dollar borrowing limit from the US Treasury in 2012: 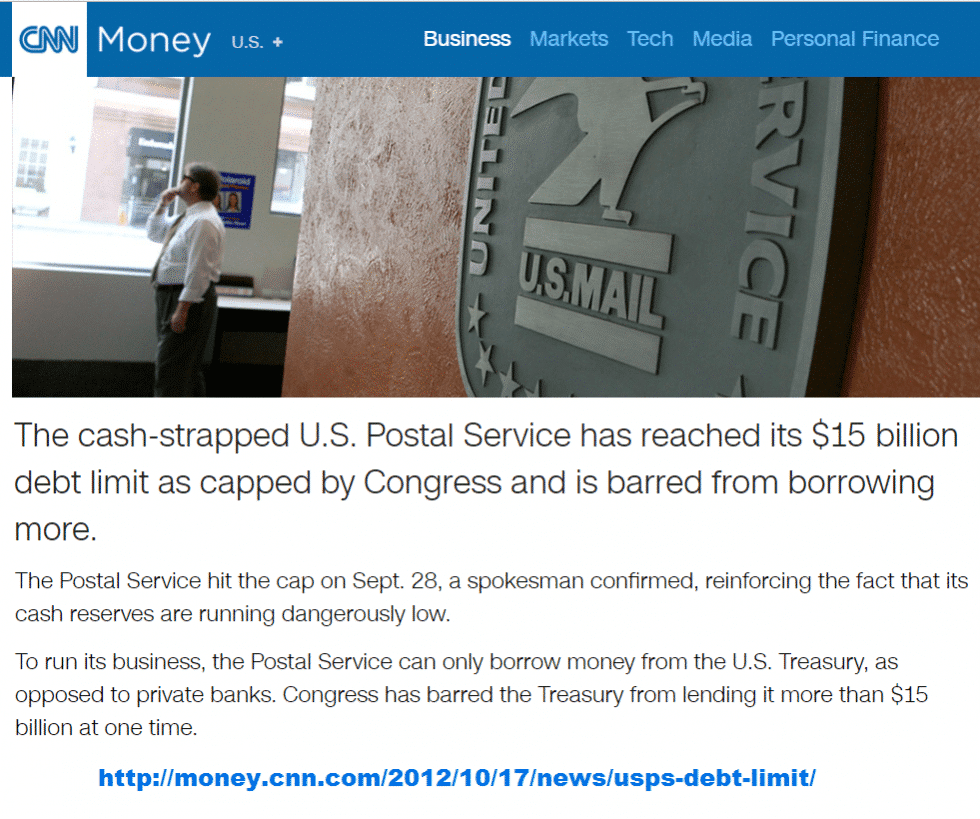 Most of you probably don’t follow the USPS financial reports very or keep up with the number of days of operating cash the USPS has on hand at any given time. It generally averages around 30 days of operating cash on hand, not a lot of padding to ride out an unexpected downturn, but enough to operate on. You can find our current liquid operating cash information on page 10 of this 2017 USPS projected budget link:
http://about.usps.com/who-we-are/financials/integrated-financial-plans/fy2017.pdf 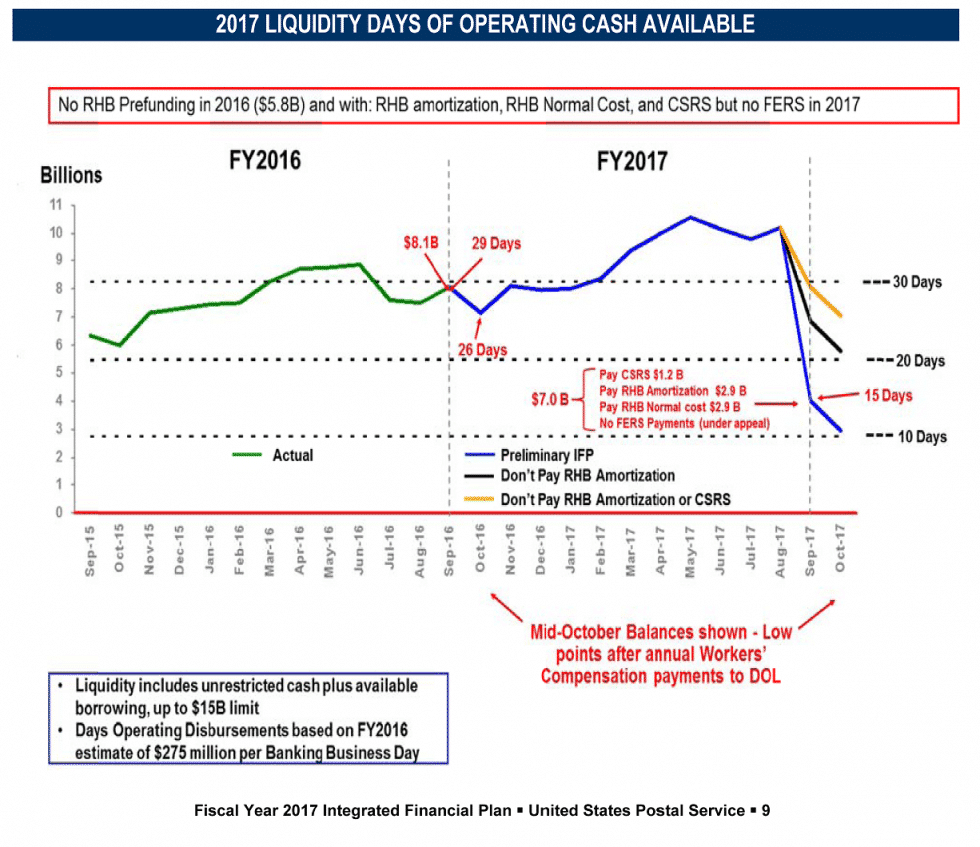 You should notice that the USPS operating cash on hand graph is projected to crash and crash hard starting around August 2017.

Should the USPS run out of money to operate, we can only speculate what kind of radical knee-jerk emergency actions a Republican House, Republican Senate and President Trump would enact with the likes of Darryl Issa leading the charge. But I will go on record now by saying it is a safe bet that it won’t be very good for anyone except Wall Street because we will have no role or say in whatever decisions they make at that point.

I see and understand the need for our Postal Unions to attempt in good faith to be a part of, and contribute to, any viable resolutions to the USPS financial problems now by maintaining as much influence as possible on whatever preventative solutions can be found while we still can. In other words, H.R. 756 is the only deal on the table and may be our last chance to have any say whatsoever about how the looming USPS financial crisis will be resolved.

In light of these facts that you should fact check for yourself, H. R. 756 while arguably not a perfect solution, is a compromise that I can live because I’m going to opt into Medicare anyway as soon as I am eligible.

For these reasons I take back my initial comparison of H. R. 756 to our 2010 APWU “Watershed CBA” that gave back some $3.8 billion dollars in our wages and set us back decades in equal pay for equal work that our PSE’s and by extension our MHA’s, CCA’s and RCA’s now suffer. The 2010 Watershed CBA sold out our youth and our next generation of postal workers in exchange for a few gains for current employees. I do not believe that H. R. 756 sells out or retirees, and we strive to become retirees someday ourselves, for the benefit of those of us still working. I would not stand for it on principle alone if it did. Much less would I support a measure that will cut my own throat in a just a few more short years.

If I have overlooked something or you have facts to the contrary, please let me know. I’m not trying to change your mind or to stop any opposition to this legislation as much as I want to share my reasons for no longer supporting the opposition to it. As many of my friends and most of my adversaries know, I’m all in when it comes to most any righteous protest and I’m not afraid to speak my mind and criticize others for taking positions I disagree with, including and especially our own national Union officers.

Call me a sell out on H. R. 756 if you will, but show me something in it that I can agree to disagree about H. R. 756 first. Otherwise you will find me in the months to come outside the White House gates again, carrying a sign with the leaders of the informational picket protest demanding President Trump sign this legislation into law.

Again, please post your H. R. 756 questions and concerns to the 21st Century Postal Worker website(www.21cpw.com) or the 21cpw Facebook group so that I can pass them along to President Dimondstein to consider adding to the forthcoming H. R. 756 Q&A.