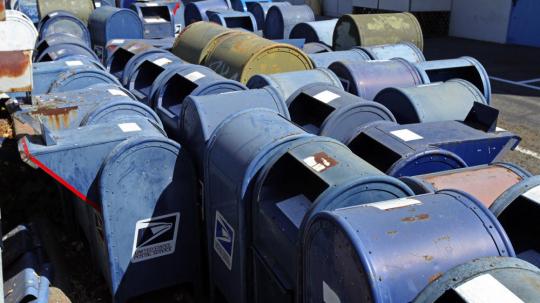 Finding a good old-fashioned mailbox where you can drop off a letter is becoming almost as difficult as finding a pay phone. The iconic blue boxes are getting to be few and far between.

Fifteen years ago, there were almost 400,000 collection boxes in the country. Now there are fewer than 160,000 of them, and the number goes down every year.

Earlier this week the Postal Service submitted its Annual Compliance Report (ACR) to the Postal Regulatory Commission for the Commission’s Annual Compliance Determination report.  The main purpose of the review process is to determine the extent to which each type of mail is covering (or not) its attributed costs.  The ACR therefore contains a mountain of data about postal rates.

According to the Postal Accountability and Enhancement Act, which says what the ACR should include, the  Postal Service is also supposed to report on customer access to postal services.  But the subject gets just one page in the report, and collection boxes merit just one sentence:

The ACR also includes a table showing the number of boxes, area by area, at the end of FY 2012, 2013, and 2014.  The following table uses those numbers, along with the year-to-year changes in percent from the previous year.

Nationwide, over the past two years the number of boxes has decreased by nearly 8,000. That’s the net decrease. Considering that the Postal Service sometimes puts up boxes in new locations, it’s likely that more than that have been removed. Even so, the rate of decrease — 2.1 pecent over the past year — is not as bad as it’s been in previous years, as a look at the history of collection boxes shows.

Read more: Where have all the blue boxes gone? | Save the Post Office.

One thought on “Where have all the blue boxes gone?”