What I took away from the Tampa APWU Local Town Hall with Mark Dimondstein on H.R. 756 – 21st Century Postal Worker 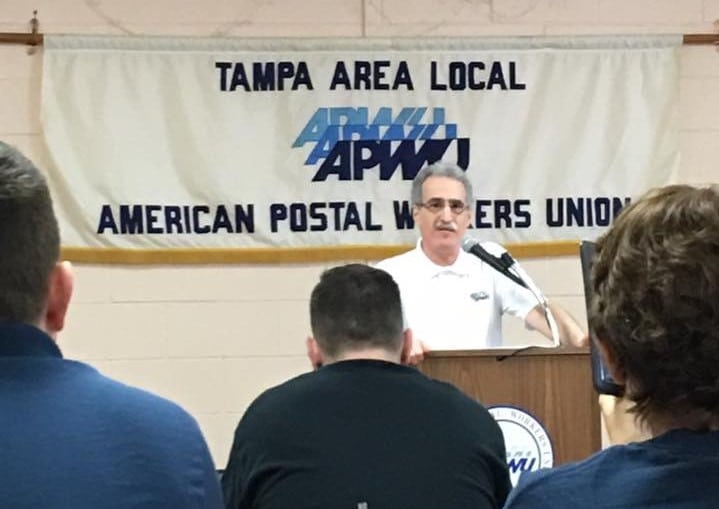 Let me start with something the President said that truly concerned me and I have not been able to stop thinking about it. The President stated “I am one of those people who doesn’t ask for permission, I ask for forgiveness.”

I can’t help but wonder if this is how he has approached HR 756? We the members have no say and he knows what’s best for all of us? We are not given clear and concise information on the reasons behind the unions’ support. We have not seen “numbers” to show why this is good for the membership. There has not been any transparency about the unions views, opinions or conclusions about HR 756. This bill will impact every current retiree as well as every postal worker who hopes to retire one day. So yes, this bill affects each and every APWU member.

There are so many questions that need to be answered with HR 756 and I walked away from this meeting still not understanding why the APWU National President would support it.

When it came to the question why force retirees into Medicare… the answer was 80% of the retirees are already in Medicare. Yet no one stops to think why the 20% are not in it. And it’s clear that the President is not concerned as to why they are not in it.

On two separate occasions, I heard the President mention that the USPS will be out of money by September. I was perplexed at this statement as not a week ago, I seen the USPS had a 1 billion dollar profit the 1st quarter. I could only think to myself that the President must have drank the Kool aid the USPS was serving.

The President assured the members that HR 756 was not a bill. It’s only a resolution. Well I was even more confused by this statement simply because I understand a resolution when presented is called H Res. (insert number) And a bill is called HR (insert number) Much like Senate bill is S. (insert number) and Senate Resolution is S. Res (insert number). So, I disagree with President Dimondstein with his view and statement that HR 756 is not a bill. HR 756 is a bill… plain and simple. This only led me to another question … why is our union president misleading the members? He must know what a Bill -vs- a House Resolution is.

The President also stated he felt it was very unlikely this ” bill ” will pass. Well that left another question… since the bill doesn’t do or provide anything positive for the APWU members and may not pass regardless, why then is the APWU National President supporting it?

President Dimondstein stated that if the “bill” ends up with “adverse” language, we (the APWU) will kill it and no longer support the “bill”. We (the APWU) do not have the authority to “kill” a bill. The President has already said “we” support this “bill”. We shouldn’t have supported such an adverse “bill” in the 1st place. Then we wouldn’t have to withdraw our support at a later date.

The President assured the members that he met with actuaries, the Health Plan as well as others and feels with the passing of the bill “we” will come out ahead in the end. Personally, I’d like to see the numbers and the opinions from the actuaries and the Health Plan Director that was used to come up with this decision.

The President yet again assured the members in attendance that he would not agree to anything that takes away FEHBP. That left me with yet another question, selling out the 20% of the retirees and all future retirees and forcing them into Medicare will only open Pandora’s box for legislation down the road. If all retirees are on Medicare, then it will only be a matter of time before congress comes up with the grand plan to take FEHBP from the retirees with the excuse of well they already have Medicare as their primary therefore they do not need the FEHBP. Why would we even open the door to this?

NARFE opposes this bill because they can see what’s bound to happen in the future and they understand by opening Pandora’s box with HR 756 will eventually have congress taking away their benefits as well.

This post wasn’t meant to seem Anti Mark Dimondstein. I hope those that take the time to read it understand I just left with more questions than I had when I had arrived at the meeting. Mark is the President and I have nothing but respect for him and the office he holds.

This is just a brief synopsis of the meeting. I will be working on another write up later in the week that will be more fact based. I’m not by any means trying to mislead anyone in the APWU, I’m only trying to inform the members.

6 thoughts on “What I took away from the Tampa APWU Local Town Hall with Mark Dimondstein on H.R. 756”