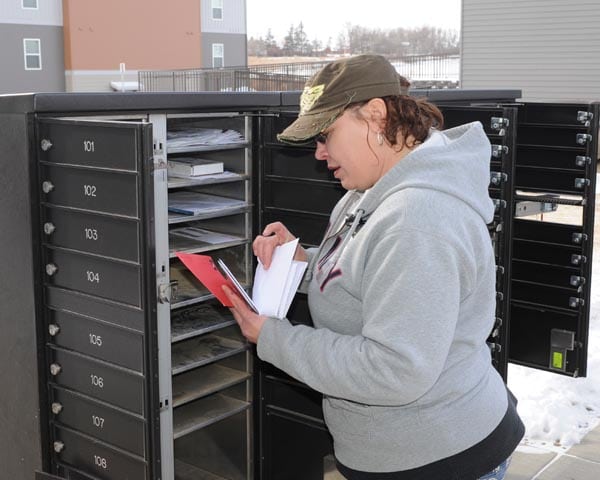 By Amy Robinson – February 10, 2015
After months of waiting, the Watford City Post Office finally began its first-ever in-town mail delivery route on Feb. 3. Under the new in-town mail route, approximately 800 Watford City postal customers will now get their mail delivered to one of the 45 different central box units (CBU) that are located throughout town.

Of course, this doesn’t halt all trips to the post office, but it will substantially eliminate the majority of those customer’s post office visits every week. If customers get parcels that are too large for their CBU slots or the two parcel slots in their centralized unit, they will be delivered and left at the customer’s house (if there is also an associated physical address). If a signature is required, the customer will have to go to the post office to pick it up with their slip.

“People should come in to the post office as soon as possible and find out if they are on the delivery service list for this new route,” said Nate DeClerck, Watford City Post Office postmaster. “That list is posted on the wall across from the parcel lockers. If they are on the list, then they need to pick up their key, get their unit number, and then locate their new CBU location. If they are on the list, but do not currently have a CBU slot, then they need to come talk to me so we can get a unit established for them.”

Each of the 45 CBU locations are units comprised of 16 slots, one for each customer assigned to that location, and two parcel slots for bigger packages that do not fit in a customer’s assigned slot. For customers that have been receiving curb-side postal service, those customers will continue getting that service. No new customers will be added to this pre-existing service, however, but instead will be eligible for a CBU.

“Of the 45 existing CBU locations, 39 will be in use immediately,” said DeClerck. “All of Hunter’s Run will be added to this new route during the week of Feb. 9 through 13, which will comprise about another 70 units. The other six CBU locations will be added to a new route that is projected to start around the beginning of April, and that route will service mostly customers in the southwest part of town. But we’ll continue to grow.”

DeClerck started out driving and servicing this new route until a loan route person was brought in on Monday, Feb. 9.

“Right now we have three full-time clerks assigned here, with another one on loan,” said DeClerck. “Out of our five routes in Watford City, we have two employees that are actually assigned to routes. We have to fill in for the others. So, in total we will have 10 postal employees, with the newest having started on Monday, Feb. 9. We’re still short-handed and we currently have two open vacancies here.”

And DeClerck doesn’t see business slowing anytime soon. Even with the current low oil prices, he feels that the ‘boom’ is just going to continue here.

“I understand that people are frustrated waiting in line at the post office,” said DeClerck. “We are trying our best to alleviate and resolve those frustrations. But they need to also understand that we have mail that has to go out every day, and when we are short-handed, there’s no way around that. I do want to thank the customers for their patience and I just ask that they continue to support us as we transition into this new phase.”

Daily operations at the post office in Watford City start at 8:30 a.m., when the truck with mail first arrives. And many nights, those operations don’t end until 10 p.m. In addition to providing service to the customers lined up at the front desk, there is entirely another hidden ‘matrix’ of the post office most people will never see, experience, or navigate through.

There is an entire room, approximately 24 feet by 30 feet, that is lined with packages of all sizes, from ceiling to floor, with an assortment of rolling storage containers in the middle, also filled with an abundance of packages. Each parcel’s bar code is scanned, which then selects the designated area where that specific parcel is to be placed, whether it goes in the section for post office boxes, a designated route, a holding section, or an undeliverable/return section. Almost every inch of that room is filled to the brim.

“If customers don’t pick up their package by the 14th day, per postal regulations, we have to send those packages back to the sender,” said DeClerck. “Unless they go online to usps.com and request us to hold their package for a certain amount of time.”

Other daily operations include going through and separating the trays of letter mail, which according to DeClerck, can take up to 20 minutes per tray. Also, there is usually an average 40-inch stack of flats every day that has to be sorted and put into the post office boxes. Then, there is another entire section of mail that has been ‘kicked back’ from the machines, and has to be manually separated and placed into its designated space. Those are only pieces of a very large puzzle in the operating and maintaining of the Watford City Post Office.

In addition to being the temporary postmaster for the Watford City Post Office, DeClerck is also the temporary postmaster for both the Arnegard and Alexander Post Offices. His temporary term, which was slated to end in January, was extended through April 3. There is currently no word regarding who will be replacing DeClerck in April, but he assures the community that the post office will continue its daily service to customers.

“I just want to remind the community to come in and get the keys for their units,” said DeClerck. “Also, anything not addressed with a post office box will be delivered to their unit. If their box fills up, we will then hold the contents for 10 days, at which point, it will then be sent back. I’d like to also remind the community to not park in front of these units. And lastly, I’d like to thank the community again for their patience and continued support as we transition.”