By Ben Smith – February 10, 2015
WASHINGTON — On Feb. 10, 2007, Barack Obama stood outside the state capitol in Springfield, Illinois, and announced his candidacy for president, promising a generational call to change the “ways of Washington,” gauzily promising a “future of endless possibility.” Reporters peered down at the senator from a building behind the sprawling, freezing crowd. “What’s stopped us is the failure of leadership, the smallness of our politics,” Obama said, “the ease with which we’re distracted by the petty and trivial, our chronic avoidance of tough decisions, our preference for scoring cheap political points instead of rolling up our sleeves and building a working consensus to tackle big problems.”

Eight years later — to the day — President Obama offered a spirited, sometimes combative defense of his six years in office, and of the ways in which the politics he sought to change have turned his presidency harsher, more tactical, and at times more frustrating than the crowd in Springfield hoped. Obama’s interview with BuzzFeed News Tuesday comes at a moment when he is feeling both the obvious satisfaction of forcing through major policy shifts, and the limits of his waning presidency. The interview was the last in a series of conversations with media outlets that didn’t exist, or barely existed, when he first ran for president. And it was the latest effort to make himself, his message, and his appeal to young voters heard through a disorienting new media conversation that no public figure can control completely…

…Obama saved his sharpest words Tuesday for American companies who have not entirely embraced the spirit of the Affordable Care Act, his health care overhaul. Under Obamacare, the federal government, beginning last month, requires that companies with 100 or more full-time workers either cover their employees’ health care or pay penalties of $2,000 to $3,000 per employee. The legislation applies to workers who put in at least 30 hours a week — and some companies are now going to great lengths to make sure their part-time workers do not exceed that threshold.

In particular, the office supply giant Staples, BuzzFeed News reported exclusively Monday, has warned workers who put in more than 25 hours a week that they could be fired. 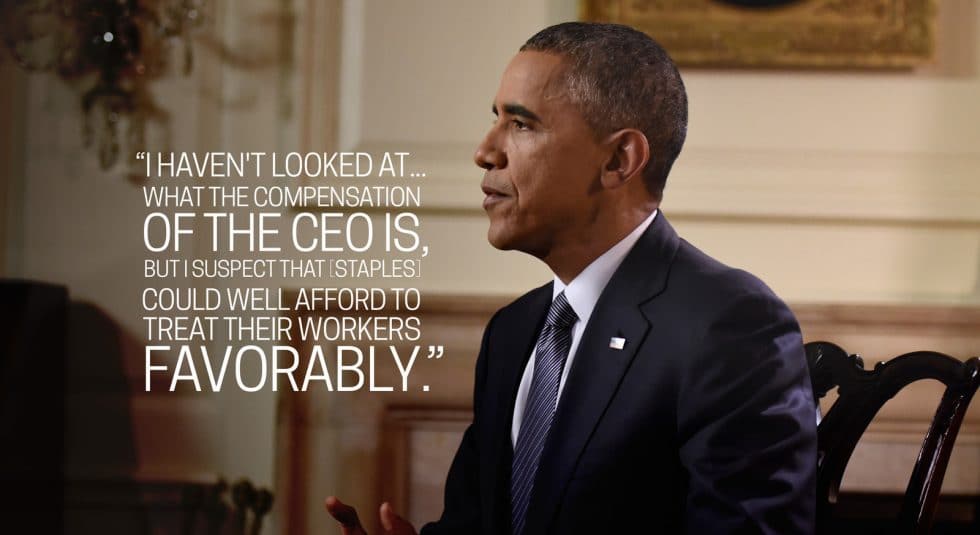 “There is no reason for an employer who is not currently providing health care to their workers to discourage them from either getting health insurance on the job or being able to avail themselves of the Affordable Care Act,” Obama said. “I haven’t looked at Staples stock lately or what the compensation of the CEO is, but I suspect that they could well afford to treat their workers favorably and give them some basic financial security, and if they can’t, then they should be willing to allow those workers to get the Affordable Care Act without cutting wages.”

“It’s one thing when you’ve got a mom-and-pop store who can’t afford to provide paid sick leave or health insurance or minimum wage to workers … but when I hear large corporations that make billions of dollars in profits trying to blame our interest in providing health insurance as an excuse for cutting back workers’ wages, shame on them,” Obama said….

Read more: Obama Defends His Legacy: “These Are The Kinds Of Things You Learn” – BuzzFeed News.