(January 8, 2015) POCATELLO, Idaho — Right now Pocatello leaders and community members are working on a plan to save Pocatello’s mail processing plant.  KPVI News 6 spoke to members of the group trying to save the plant Wednesday as they were working out their ideas. 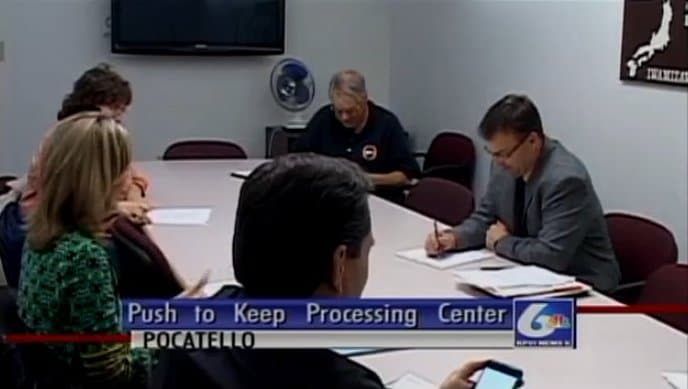 Wednesday’s meeting focused on rallying support in Washington D.C. to try and keep the facility open, getting the backing on Idaho’s U.S. senators and representatives.

“A lot of people depend on the timely delivery of their mail,” said John Paige.  John Paige is a letter carrier for the postal service.  He says closing the facility could have a ripple effect through the surrounding community, from jobs, to delaying mail delivery.  “If we did close it would be sent to Salt Lake City and the service standards would be lower from two to three days of delivery,” said Paige.

The post office says shuttering the facility would save an estimated $750 million a year.  It’s just one of 82 postal processing centers across the country set to be shut down this year.  The hope is lawmakers in Washington approve a new study of how a closure might impact a community.

“Let’s not be so rash,” said Paige. “Let’s take time to make a right decision on it.”

If the processing center does close in April dozens of federal employees could be uprooted.

LeNae Parkin is a processing clerk with the post office.  She is one of the people who would be relocated if the plant closes.  “I’ll probably want to stay with the Post Office because for economic reasons and in Pocatello right now it’s very difficult to find jobs,” said Parking.  But it would mean sacrificing living close to her family.
“I don’t want to leave my grandkids or my kids,” said Parking.

170 representatives and 51 senators have already signed on a one year moratorium.  If you want to contact a congress member about the planned closure you can call 202-224-3121.  Next week Mayor Blad will hold a press conference detailing the letter being sent to congress.