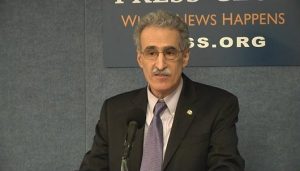 The formation of the alliance has been in the works for months, and has been the vision of APWU President Mark Dimondstein from the beginning of his term of office. At his installation speech before more than 1,000 union members in November 2013, Dimondstein called for a grand alliance to save the USPS as a public postal service and to protect postal jobs. “Writing Congress is important,” he said, “but it’s not enough. Lobbying for legislation is important, but it’s not enough.” To succeed, he said, postal workers must build a movement.