By Nicole Carr – January 12, 2015
FAYETTEVILLE (WTVD) — Marching through a downpour, about 30 postal workers made their way from the Airborne Special Operations Museum to the Green Street Post Office Monday morning.

They didn’t mind the rain because 400 good paying, local jobs are at stake, they said.  “U.S. Mail is not for sale,” the protesters chanted, their shoes splashing through puddles along Hay Street. 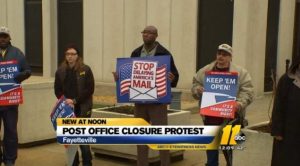 The group is protesting the pending closure of the Green Street facility, a major hub for mail in southeastern North Carolina that processed 709 million pieces of mail last fiscal year. The closing, slated for this spring, is a part of the latest phase of the Postal Reorganization Act, which consolidates facilities in a federal cost-cutting effort that began in 2006. Four hundred jobs would be lost from Fayetteville’s main post office, and union leaders said Monday to expect a major change in the way you get your mail. 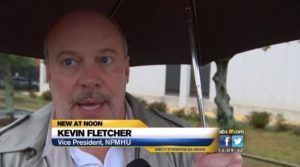 Fletcher, who is based in Richmond, said the Green Street facility processes mail for most of southeastern North Carolina, but the mail would be sent to the western part of the state when the facility closes.

“What you mail today in Fayetteville will not get a Fayetteville postmark,” said Fletcher. “It will be shipped to Charlotte and they will postmark it there. Then they will ship it back or the carriers will deliver the mail three, four, five days later.”

In a fact sheet regarding the reorganization, USPS noted a 53 percent decline over the past decade in single-piece first-class mail volume alone. The sheet said package service and priority mail, including most medication and small business shipping, will remain unaffected. They expect to save $2.1 billion in the first two phases of the reorganization.

Fletcher and other postal workers highlighted the effect the closing would have on Fayetteville’s large veteran population. Workers spoke about the number of veterans who have made the postal service a second career.

“We cannot forget that we have the majority of veterans here at this facility and you’re going to tell them that they’ve gotta move on and go someplace else? Are you kidding me,” yelled Debby Szeredy to the crowd.

“They deserve to live here and stay here. We told them we were going to give them a job when they got back from the war, and now you want to pull their lifestyles, their whole life and make their families move. Come on,” said Szeredy.

Coachman said jobs will be available for workers who wish to remain USPS employees. They may involve different job description and they may be in other locations.

“That’s why the postal service announced this so early,” said Coachman, noting there have been no layoffs since the reorganization began. “The postal service has frozen jobs at certain facilities to allow for the flexibility once the consolidations started in January.”

But local workers said losing the jobs in Fayetteville still means crippling the local economy. Cumberland County Commissioner Charles Evans joined the group and told the crowd he’d recently asked Gov. Pat McCrory’s Chief of Staff about the post office closure in a conversation about Sanderson Farms jobs. Sanderson Farms is a chicken plant that had potential to bring 1,000 jobs to the area before commissioners voted against discussing the necessary incentives package to seal the deal. Evans said the COS knew nothing about the postal service jobs.

“It’s a lot of good paying jobs on the line and people just need to wake up,” said L’Jwandre Williams, a seasonal postal worker, who worked downtown. “Don’t let them take this from us. This is one thing that helps out with the economy just as much as the military and just as much as anywhere else.”

The group encouraged the community to reach out to congressional leaders and voice concern about the pending closure.