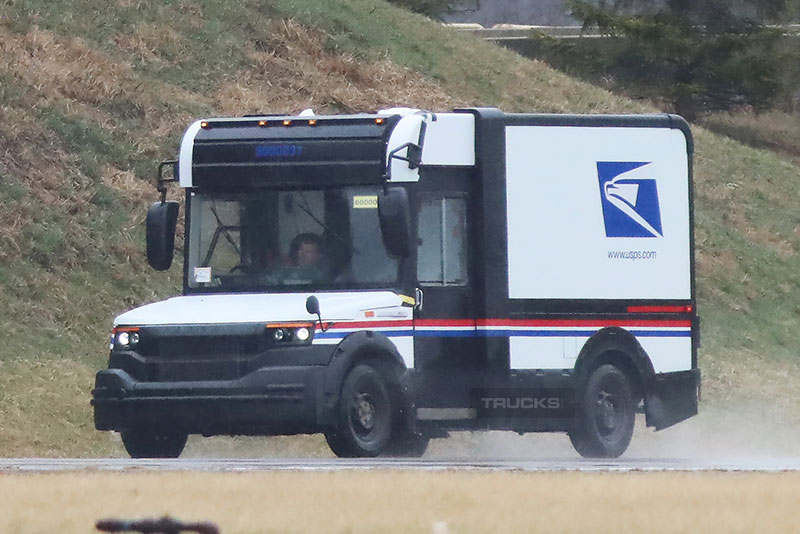 By Carly Schaffner – March 05, 2018
The U.S. Postal Service is testing a prototype of a plug-in hybrid mail truck from Karsan Otomotive, a Turkish truck maker.

The truck, one of a series of prototypes from five different manufacturers competing to build the next mail truck, is undergoing tests on pavement and rural dirt roads in the Midwest.

Photos taken by Trucks.com last week show that the prototype that Karsan is building with team member Morgan Olson is a plug-in hybrid. There are ports on two sides of the truck. One on the right side of the vehicle over the front wheel looks to be for electricity. There’s a conventional gasoline port above the left rear wheel. 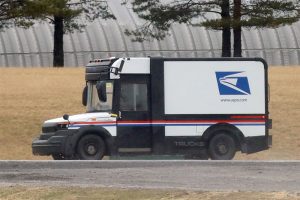 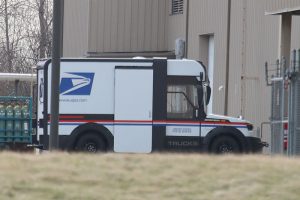 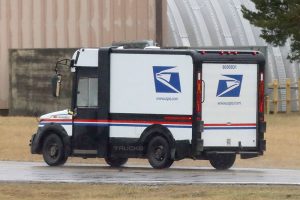 Karsan will provide the hybrid technology. Morgan Olson, a Sturgis, Mich.-based manufacturer of walk-in vans that has a longstanding relationship with USPS, will manufacture the body. Karsan has designed and built more than 277,000 gas and electric cars as well as specialty automobiles in Europe.

The USPS has said that half the prototypes “will feature hybrid and new technologies, including alternative fuel capabilities.”

It might be the oddest-looking of the five prototypes competing for the lucrative USPS truck order. Its low-slung boxy hood projects forward under the windshield. Bulky sideview mirrors — resembling monkey arms — are suspend from both sides of the upper cab.

There’s a sliding cargo door on the right side of the truck.

The vehicle carries the USPS eagle logo painted on each side and has the Karsan nameplate on top of the grille between the headlights.

The truck appears to have a high-mounted back-up camera or cargo deck monitor. It was spotted undergoing road tests in frigid winter conditions.

The USPS will choose models from the prototypes to replace up to 180,000 aging mail trucks. Of the 215,000 in operation, 140,000 are at least two decades old. The changeover — which may be incremental, replacing 12,000 trucks at a time — could take place over the course of seven years. The contract is worth an estimated $6.3 billion.

There are five contenders in the competition, which the USPS has named the Next Generation Delivery Vehicle, or NGDV, program.

In addition to the Karsan/Morgan Olson team entry, VT Hackney/Workhorse Group also are participating as a duo. The Hackney prototype is an electric vehicle that shares many components with the Workhorse W-15 electric pickup truck.

South Bend, Ind.-based AM General submitted an internal-combustion engine truck with start-stop technology for improved fuel efficiency. The manufacturer builds the military Humvee and once made the civilian Hummer H1 before the brand was shuttered by General Motors.

AM General also has an existing relationship with the USPS. It built the Dispatcher Jeep — the first civilian model of the military Jeep — which was used by the agency as a delivery vehicle into the early’90s.

The U.S. division of the Indian manufacturer Mahindra, known for building right-hand drive commercial vehicles, entered a truck with a mild hybrid system, according to a National Highway Transportation Safety Administration filing.

Another entry comes from Oshkosh Corp., headquartered in Oshkosh, Wis. It manufactures vehicles such as aircraft rescue and fire trucks, snow blowers and tactical vehicles and has a long history of contracts with the federal government. Oshkosh and the USPS have not provided details on its entry.

“Real-world” testing of the prototypes started last fall. The USPS has been running the trucks up against extreme weather conditions and varying landscapes in Flint, Mich.; Leesburg, Va.; and Tucson, Ariz. Other test locations include Tempe, Ariz.; Utica, Mich.; and Manassas, Va., according to the USPS.

Previously the USPS said it would choose the contract winner in early 2018. On Friday the agency declined to comment on the status of its decision.