The Postal Service will honor the suffrage movement and the people who carried it to fruition when it releases its 19th Amendment: Women Vote stamp on Saturday, Aug. 22. 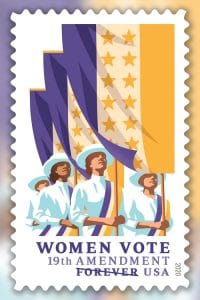 The 19th Amendment: Women Vote stamp features a stylized illustration of suffragists marching in a public demonstration and wearing the colors of the National Woman’s Party.

The Forever stamp commemorates the centennial of the ratification of the constitutional amendment that guarantees women the right to vote.In 1848, the U.S. women’s suffrage movement coalesced in Seneca Falls, NY, where 300 women and men gathered for a two-day women’s rights convention.

Their call for women’s suffrage spread across the nation in the decades that followed, as supporters of the movement discovered change would be frustratingly slow.

On Jan. 10, 1918, the House of Representatives approved a constitutional amendment granting women the right to vote. The amendment was introduced in the Senate that September, and President Woodrow Wilson gave a rousing speech in support of it.

After the Senate failed to pass the amendment, suffragists continued their public protests until Wilson called for a special session of Congress.

The amendment finally passed in the House in May 1919 and in the Senate in June 1919. The tremendously difficult process of ratification, which requires three-quarters of all states (36 of 48 states at the time), took another year.

Inspired by historic photographs, the stamp art features a stylized illustration of suffragists marching in a public demonstration. The clothes they wear and the banners they bear display the official colors of the National Woman’s Party — purple, white and gold.

Designed by art director Ethel Kessler using art by Nancy Stahl, the stamp includes the words “Women Vote” and “19th Amendment” in shades of purple beneath the image.

The stamp will be available at Post Offices and usps.com.