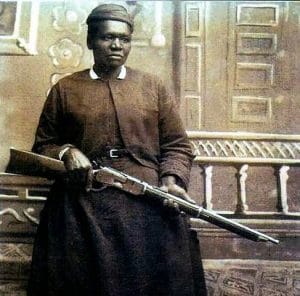 Fields, who was profiled last week by the Root news site, was born a slave in 1832 in Tennessee and freed after the Civil War. She eventually settled in Cascade, MT, where she got a job driving a mail wagon at age 63. Affectionately known as “Stagecoach Mary,” the cigar-smoking Fields was good with her fists and known for being a crack shot with a heart of gold.

“Braving all sorts of weather and ceasing work only for the worst, Fields brought mail to settlers [in] Montana, one of very few black people in the new state,” Henry Louis Gates Jr. and Julie Wolf wrote in the Root.

Actor and Montana native Gary Cooper, who met Fields when he was nine, later described her as “one of the freest souls ever to draw a breath or a .38.”