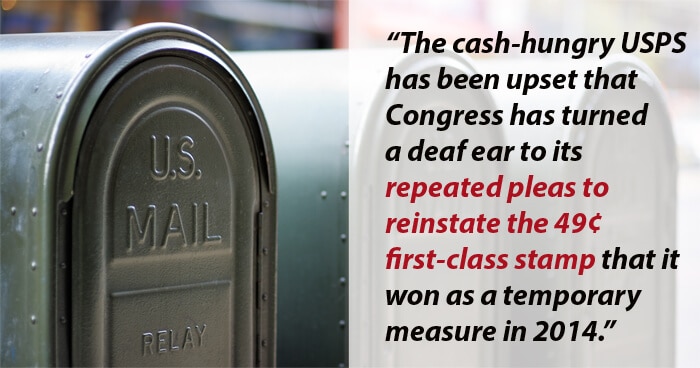 That’s when the United States Postal Service has told mailers it wants to implement its next rate change.

But it’s unknown if the Postal Service will use its annual rate change to seek an end to the 47¢ first-class stamp.

By law the USPS cannot raise stamp prices above the rate of inflation, and any changes must be endorsed by the Postal Regulatory Commission.

It’s well known that the cash-hungry USPS has been upset that Congress has turned a deaf ear to its repeated pleas to reinstate the 49¢ first-class stamp that it won as a temporary measure in 2014.

And postal officials have made clear to mailers that they want to maximize the annual price increase when the new rates are imposed in January.

Stephen Kearney, executive director of the Alliance of Nonprofit Mailers, told Linn’s he doesn’t know what the new rates will be but he expects they will be announced Oct. 17.

First-class rates will rise by about 0.8 percent and standard or advertising mail about 0.9 percent, he said.

But there are so many subclasses of mail in first-class and standard mail, it’s not automatic that the single-piece letter rate will rise by a full cent, Kearney stated.

“So if they go up 1 cent on the single piece stamp to 48 cents, they would need to reduce elsewhere in first class,” he said.

One reduction the Postal Service is considering it to allow the third ounce of first-class letters to be free.

The USPS is hinting it would like to change its “standard mail” classification into “marketing mail.”

One thing that is happening with the looming rate change is that the USPS has been more transparent with mailers about what changes may be in the works, Kearney said.

The reason is a 2015 rate case the USPS now views “as a disaster,” Kearney said in his newsletter. Two parts of that case had to be resubmitted after the PRC questioned the accuracy of the USPS request.

“The USPS learned from the experience and has committed to avoid surprises and to fix some of the pricing signals that did not work as expected,” he said.

“The Postal Service seems to be doing the best job in years of communicating a price change in advance,” Kearney said.

He noted the Postal Service has distributed a list of changes it may make part of the rate request.

It is also seeking to avoid “rate shock,” Kearney said.

Kearney included a copy of a small poster, patterned after a World War II British war poster, with his report to mailers.

“Keep Calm/Prepare for Change,” it said under a USPS logo.