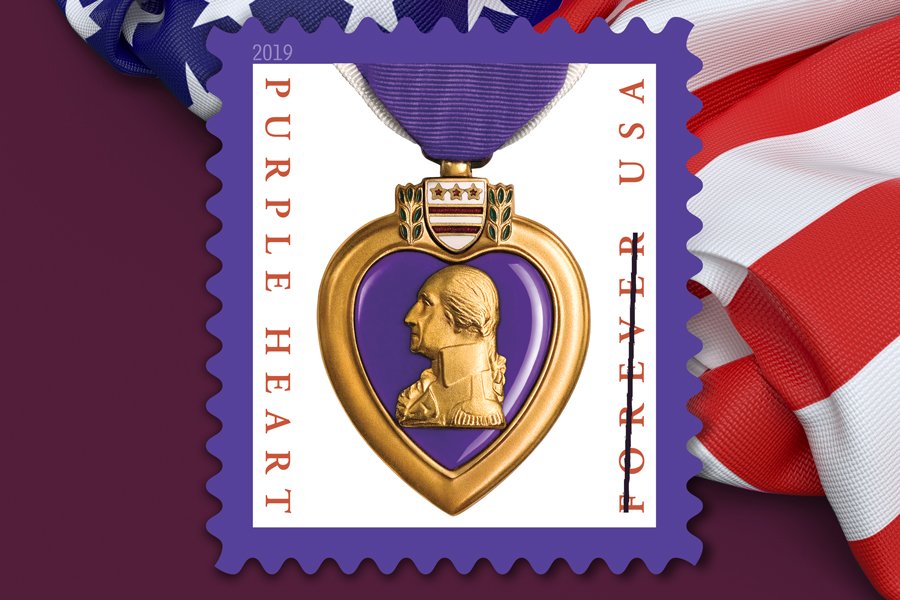 The Purple Heart Medal stamp, a redesigned version of a 2012 release, features a purple border matching the brilliant purple of the medal and its ribbon.

The Purple Heart is awarded in the name of the president of the United States to members of the military who have been wounded or killed in action. By issuing the stamp, USPS wants to honor the sacrifices of the men and women who serve in the U.S. military.

“The members of the United States military come from all walks of life, but they are bound by a willingness to serve their country. And when a service member answers our country’s call, they give up a lot,” said Greater Indiana District Manager Todd Hawkins, who led the dedication.

The ceremony was held at an American Stamp Dealers Association stamp show in Noblesville, IN.

The stamp — which is available at Post Offices and usps.com — features a purple border matching the brilliant purple of the medal and its ribbon.

The Purple Heart was first established by then-Gen. George Washington during the Revolutionary War and called the Badge of Military Merit, consisting of a heart made of purple cloth.

It was discontinued after the war, but reinstated in 1932 on the 200th anniversary of Washington’s birth.

The new version of the award consists of a purple heart of metal bordered by gold and suspended from a purple and white ribbon.

In the center of the medal is a profile of Washington beneath his family coat of arms.