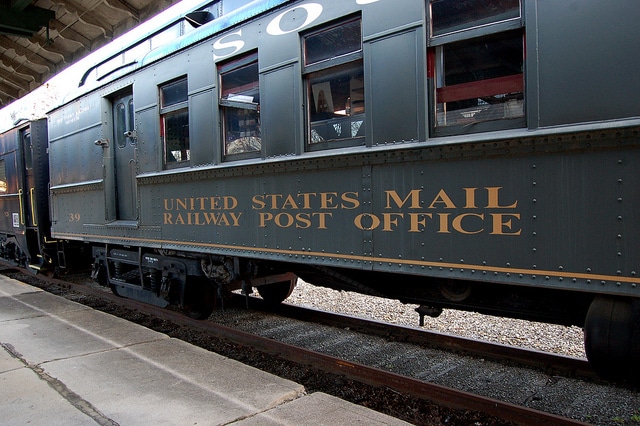 By Cynthia Shahan – January 10, 2015
Once upon a time, the United States Postal Service enjoyed a successful relationship with the nation’s railroads. The California State Railroad Museum Foundation reminds us of the once-speeding postal trains, rather than today’s trucks, where post office workers sorted letters during the trip. Moreover, they did so in “swaying cars filled with canvas bags and wooden pigeon holes.” That must have been fun.

Perhaps a change back to rail and train is once again a practical venture. Reasons to encourage rail integration were laid out in a recent report by the Postal Service’s Inspector General.

The report supports the argument that, in this case, the New Jersey mail service could save about $10.8 million a year choosing to use rail instead of long-distance trucking. The information in IG’s report seems solid. However, arguments from postal management ensued. McAllister continued with some back-and-forth points, noting that it is budget numbers that “speak the loudest.”

“In 2013, the Postal Service spent more than $3.4 billion on HCRs [highway contract routes] and only about $43 million on rail,” the report cautions. Rail, management said, “is not a viable way to meet service standards and does not fit into its operating plans.” Even so, the IG argued that rail is “a viable option and should be reconsidered.”

Due to the managerial opposition, it will be a while before any transition to trains that service postal loads. However, they did agree to consider the recommendations.

In spite of opposition, a convincing conversation might generate adaptation back to rail for some postal services. Last year, the rail industry did enjoy a resurgence as a Wall Street Journal video and Betsy Morris reported on America’s New Railroad Age.

The postal service could certainly be much cleaner if it switched to rail. Trains from Seimens are just one example of how trains have become more fuel-efficient and burning cleaner. Roy L. Hayes in a CleanTechnica post reported that, according to Federal Railroad Administrator Joseph C. Szabo, “the lighter weight locomotives can operate at speeds up to 125 mph. A diesel version of the ‘Charger’ is currently pulling some 1,600 passengers and freight trains through-out Europe. The electric version was introduced in the US last year and already at work in the Northeast.”

via USPS OIG: Suitability of Rail Transportation Suggest It Is Time To Use Rail Once Again | CleanTechnica.

One thought on “USPS OIG: Suitability of Rail Transportation Suggest It Is Time To Use Rail Once Again”