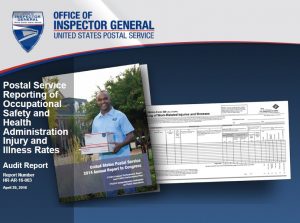 Background
The Occupational Safety and Health Administration (OSHA) requires covered employers, including the U.S. Postal Service, to record information about every work-related injury or illness that involves medical treatment beyond first aid, days away from work, or death. OSHA also provides an OSHA injury and illness (I&I) rate that employers use to determine problem areas and progress in preventing work-related injuries, illnesses, and deaths. Employers calculate the OSHA I&I rate as the number of recordable injuries and illnesses occurring among a given number of full-time employees over a given period of time.

The Postal Service’s OSHA I&I incident rate is one of several performance indicators in its National Performance Assessment (NPA), the national report card that measures progress toward achieving performance goals.

The Postal Service Safety and OSHA Compliance Program, the rate indicator sponsor, is responsible for calculating and validating the OSHA I&I rate. The target rate is established each fiscal year and a snapshot of the actual rate is taken at the end of the fiscal year to determine if the performance goal was met.

The Strategic Business Planning group is responsible for compiling and publishing several operational and performance statistics in the Postal Service’s annual report to Congress, which includes the OSHA I&I target and actual rates.

This report responds to a request from Senator Charles Grassley of Iowa to review the Postal Service’s reporting of OSHA I&I rates and whether it had an impact on employees’ performance bonuses for fiscal years (FY) 2010 and 2012. Our objectives were to evaluate the accuracy of OSHA I&I rates reported to Congress and the impact of any errors on salary increases and lump sum payments. We also evaluated the Postal Service’s actions on recommendations from our previous audit report on OSHA recordkeeping.

Although, the Postal Service’s I&I rates were used as one of various factors to address performance, the indicators that were used were accurate and not the same erroneous rates used in the reports to Congress. Thus, these erroneous rates did not impact salary increases and lump sum payments.

The incorrect statistics published in the reports to Congress occurred because the Postal Service did not have written processes to ensure accurate data collection, validation, and reporting. Specifically, Strategic Business Planning officials and Safety and OSHA Compliance officials did not verify the accuracy of the rates before the reports were published. Publishing incorrect rates in reports to Congress could impact the Postal Service’s goodwill and public credibility.

Finally, although officials established online training for personnel responsible for determining OSHA recordable cases and completing related forms to implement our previous audit recommendation, they did not make the training mandatory to ensure appropriate personnel completed the training. We found that 136 of a sample of 153 employees (89 percent) did not complete the online courses. Insufficient training could prevent personnel from effectively performing their OSHA recordkeeping responsibilities and result in citations and significant penalties to the Postal Service.