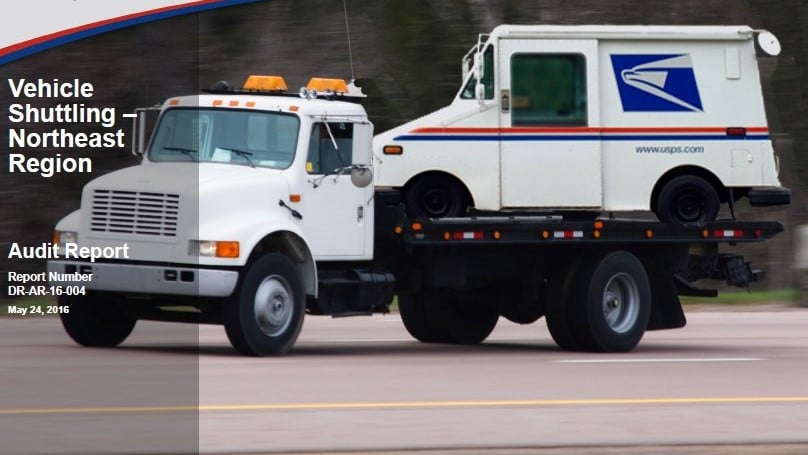 Background
Shuttling is the scheduled movement of vehicles from a Post Office to a vehicle maintenance facility (VMF) or commercial vendor for maintenance. VMF managers decide whether to use Postal Service employees or commercial vendors for shuttling services. Shuttling labor costs are tracked through the Solution for Enterprise Asset Management (SEAM) system.

During fiscal years (FY) 2014 and 2015, the U.S. Postal Service spent almost $32 million and $43 million, respectively, on vehicle shuttling labor. The Northeast Region, with 38 VMFs, had the highest costs nationwide in FYs 2014 and 2015, spending $8.6 million and over $11 million, respectively. We judgmentally selected 25 of the 38 VMFs in the Northeast Region for review.

Our objective was to determine whether the Postal Service was cost effectively shuttling postal-owned vehicles in the Northeast Region.

What the OIG Found
Northeast Region fleet management did not cost-effectively shuttle postal-owned vehicles at the 25 VMFs we reviewed. Specifically, 17 of 25 VMF managers did not perform cost analyses to obtain the most cost-effective shuttling rates because there was no requirement to do so.

Our analysis showed that VMF managers paid commercial vendors anywhere from $25 to $250 per hour, plus various mileage and hookup fees, for shuttling services. When cost analyses are not required, inconsistent fees could result in overpayments for services going unnoticed.

Finally, management understated shuttling costs because labor hours were not accurately put into SEAM for any of the 25 VMFs in FY 2014 and for 23 of the VMFs in FY 2015.

These conditions occurred because the Postal Service’s Fleet Management Handbook lacks specific policies and procedures for managing and overseeing shuttling services, such as vendor selection. The handbook specifies which account codes should not be used for vehicle shuttling. In addition, the handbook only provides guidance on entering data and reconciling costs for commercial vendors with national or local vehicle maintenance repair agreements.

Lack of standardized shuttling procedures for vendor selection, reconciliations, and shuttling rates and fees could result in the Postal Service not receiving the most cost-effective service and paying for questionable shuttling services.

In addition, inaccurate reporting in SEAM gives limited assurance that managers can rely on shuttling cost data to make operational decisions. Reducing commercial labor workhours could save the Postal Service about $2.1 million in FY 2016 and $2.7 million in FY 2017.