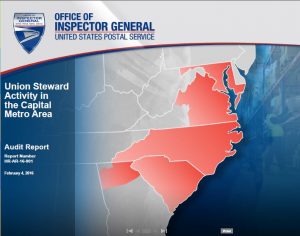 The U.S. Postal Service has three major unions — the American Postal Workers Union, the National Association of Letter Carriers, and the National Postal Mail Handlers Union — that represent majority of non-rural bargaining employees. Each union has a collective bargaining agreement that allows it to certify Postal Service employees as union stewards who represent other employees at their work locations.

The Postal Service must allow stewards official steward duty time during their scheduled workhours to investigate, present, and adjust grievances. Similarly, each employee has the right to participate in union activities, including seeking the representation of a steward.

When it is necessary for a steward to conduct steward duty or the employee to meet with the steward, the steward and employee must request permission from their immediate supervisor. Supervisors must complete a Postal Service (PS) Form 7020, Authorized Absence from Workroom Floor, when employees leave work for various reasons and retain the forms for 3 years.

What The OIG Found

Management in the Capital Metro Area did not always ensure union steward workhour data was accurate and consistent. Specifically, supervisors at 11 judgmentally selected facilities in the Capital Metro Area allowed employees who were not certified stewards, to improperly charge 5,650 workhours to 12 operation codes designated only for certified stewards during FYs 2014 and 2015. These employees should have used operation codes designated for “meeting time”. In addition, Capital Metro Area supervisors did not always complete or retain PS Forms 7020 to authorize the release of stewards to conduct steward duties.

As a result, the union steward codes were overstated by 5,650 (15 percent) of the total 37,207 steward duty workhours at those 11 facilities for both FYs 2014 and 2015, while use of the designated operation code representing “meeting time” or other correct codes was understated. Because supervisors in the Capital Metro Area are not ensuring that employees accurately charge steward duty workhours, reported workhours are incorrect. Therefore, management could make operational decisions based on incorrect data.

We also found some workhours in operation codes designated for steward duty were not accumulated in payroll code 070 due to Time and Attendance Collection System programming errors. These errors did not affect employees’ pay. During the course of our audit, management took action to correct this issue, which should help to ensure steward duty codes are appropriately tracked in payroll.

What The OIG Recommended

We recommended management issue guidance to supervisors and other appropriate management on the proper use of operation codes for employees involved in union-related activities. We also recommended providing supervisors training on steward duty timekeeping procedures and issuing PS Form 7020 guidance.