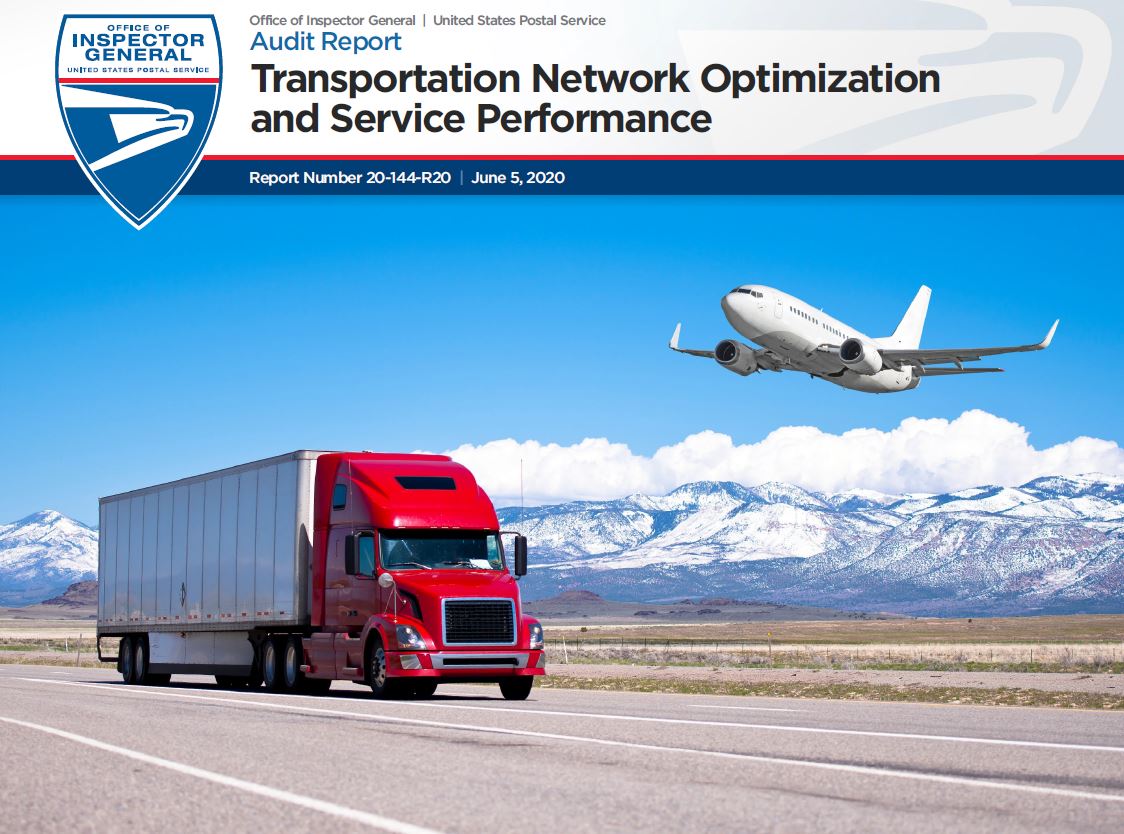 Our objective was to assess opportunities to optimize the Postal Service’s transportation network and meet service performance goals.

The transportation network has key performance indicators (KPI) for the surface and air networks. Surface network KPIs include trips on time, extra trips, cancelled trips, unrecorded or incomplete trips, trips departed not arrived, and trailer utilization (percentage of trailer used). Air network KPIs include delivery scanning, network density, delayed mail, and use of bypass containers (include mail for a single destination requiring no FedEx sorting) and mixed containers (include mail for multiple destinations requiring sorting at a FedEx hub).

This audit was designed to further determine the causes of transportation operational and service challenges. To do so, we conducted site visits at eight processing and distribution centers (P&DC) nationwide. We observed lower and better performing facilities which we selected by analyzing efficiency and service performance metrics for both transportation and mail processing operations. We also visited four THS facilities and selected the sites based on FedEx mail volume, delayed mail, and charter activity.

Our fieldwork was completed before the President of the United States issued the National Emergency Declaration concerning the novel coronavirus disease outbreak (COVID-19) on March 13, 2020. The results of this audit do not reflect process and/or operational changes that may have occurred as a result of the pandemic.

The Postal Service estimates significant revenue declines due to the COVID-19 pandemic and the resulting economic fallout, and it could run out of money by FY 2021. Therefore, it is vital for the Postal Service to focus on its financial health and address causes for costs increasing at a time when mail volumes decreased.

The Postal Service has opportunities to optimize its transportation network and improve service performance. Specifically, it routinely uses the surface and air networks to mitigate mail processing, delivery, and other delays (such as weather and traffic). In FY 2019, the Postal Service spent over $550 million extra in transportation to mitigate delays that occurred in the network.

In the surface network, it is critical for processed mail to be available for transportation in a timely manner and for transportation contractors to meet their obligations. When operational issues exist, there is a downstream effect that causes management to face difficult and costly decisions. In FY 2019, mitigation efforts for surface transportation cost $410 million. These efforts included:

In the air network, when mail does not make its intended flight, it is tendered to the next available flight, even if that means moving it to another air carrier or waiting until the next day. In FY 2019, mitigation efforts for air transportation cost at least $140 million. These efforts included:

Further, we identified causes that impacted the optimization of the surface and air networks to include misaligned scheduling, insufficient management oversight, imbalanced performance measurements, employee availability, and the inefficient allocation of mail.

In both the surface and air networks, misaligned transportation scheduling hindered efforts to meet service performance and cost savings goals. Specifically, some surface transportation schedules were not consistently updated by management. In addition, operating plans and run plan generators (which help manage mail processing operations by projecting daily machine run) were not always followed and the plant processed mail past its clearance time, causing transportation delays.

During our surface network site visits, we observed HCR operations senior-level managers and front-line supervisors were generally not present during the evening and early morning shifts. At the eight P&DCs we visited, 76 percent of HCR trips ran during evening and early morning shifts, but only 25 percent of transportation supervisors worked during these shifts.

In the air network, THS sites were not issued Surface Visibility mobile scanners which were contractually required at three of the four THS sites we visited. The scanners are needed to track trucks and the mail volume coming into the facility. There was also a lack of consistency as to what information Postal Service THS liaisons (liaisons) reported to HQ and who was responsible for responding to identified anomalies.

The Postal Service could put more mail on CAIR, rather than using higher cost carriers. The Postal Service uses an allocation code to determine how much volume flies on each carrier and for each air stop, allowing it to maximize the use of the lowest cost carrier. However, we determined the code had inaccuracies, leading to a misallocation of First-Class Mail (FCM) [redacted], costing the Postal Service about $50 million annually. Additionally, density assumptions in the air allocation model did not match actual density in the network, which could lead to a misestimation of needed airlift.

Finally, Transportation Security Administration (TSA) restrictions limit mailpieces flown on CAIR to under 16 ounces unless it is screened. The Postal Service mainly uses CAIR to transport FCM, which weighs 13 ounces or less. There are techniques, such as certified third-party canine screening and electronic detection, that the Postal Service could possibly use to expand its mail screening so that more mail classes could fly on CAIR.