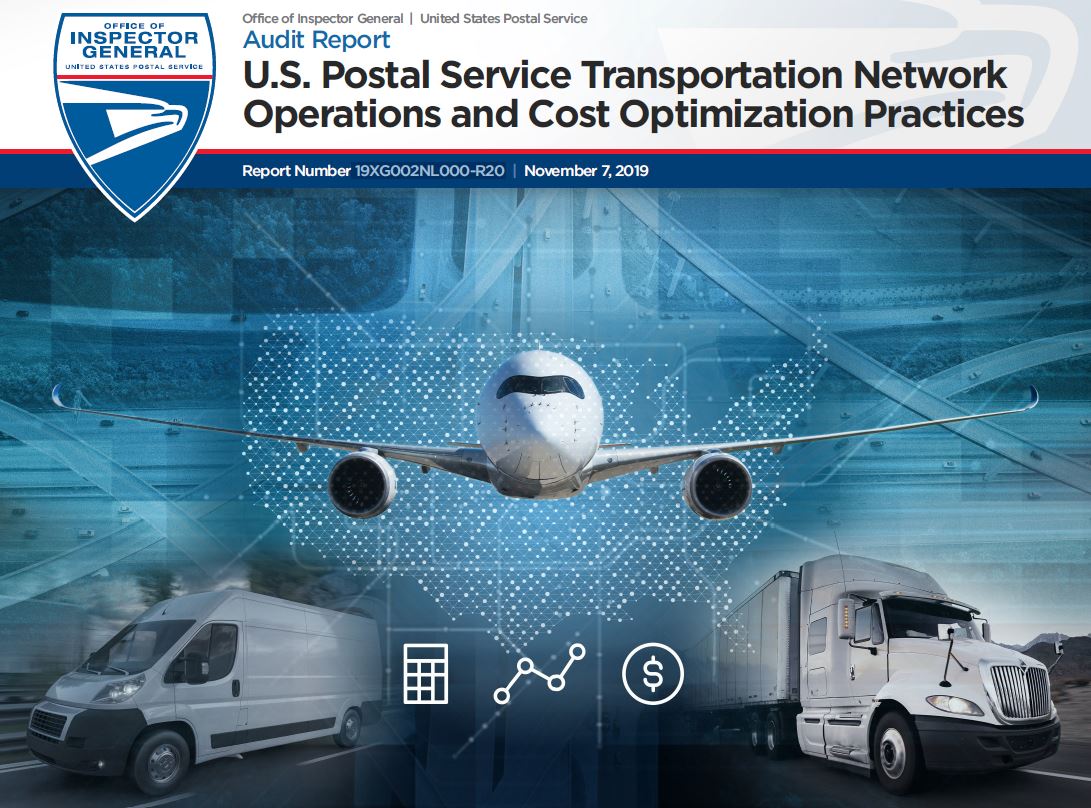 Our objective was to analyze practices and cost trends and identify risk areas within the Postal Service’s transportation network.

The surface transportation network costs about $5.6 billion and is decentralized and managed locally by district and area personnel. The network includes about 11,800 Postal Vehicle Service (PVS) routes for fleet operations and about 12,500 Highway Contract Routes (HCR). The air transportation network cost about $2.9 billion in FY 2018 and is centralized at Postal Service Headquarters (HQ) Logistics, but area-level staff are involved in executing planned air operations.

Increased transportation costs were driven by several factors, including the Operational Window Change (OWC) which reduced the transportation window. Other factors affecting costs include a 35 percent growth in package services (a 2.2 billion piece increase) from FY 2014 to FY 2018, fluctuating fuel costs, a lack of competitive choices in air suppliers, national long-haul and local driver shortages, and regulatory requirements.

From FY 2014 to FY 2018, surface transportation costs for the two largest components — HCRs and PVS routes — increased by about $878 million (from $4.5 billion to $5.3 billion, or about 20 percent). HCRs increased by about $753 million, or 22 percent, and PVS by about $125 million, or 13 percent. Further, the Postal Service incurred costs for exceptional services, such as extra detours and late trips totaling $729 million for FY 2014 through FY 2018. The Postal Service attributed these increases to the nationwide shortage of long-haul truck drivers, highway contract rate increases, and rising fuel costs in FY 2018.

Surface Transportation is responsible for servicing a fixed network and requiring daily transportation to and from about 35,000 postal facilities, regardless of mail volume. Local management of the surface network is critical to controlling surface transportation costs.

Further, our analysis of FY 2018 HCR exceptional service (e.g., extra, late, and detour trips) payment data revealed these costs were often not allocated to the proper accounts and are, therefore. understated. Specifically, we compared the exceptional service cost of $139.5 million reported in the general ledger against actual payments in the Service Change Request system and determined actual payments were $239.3 million. We were unable to reconcile the difference of $99.8 million, or 42 percent.

We also identified that data in the Surface Visibility (SV) dashboard is incomplete and inaccurate for extra and canceled trips. In addition, we found 344 expired HCRs (802,538 trips) that were inactive in the Transportation Contracting Support System; however, they were still shown as scheduled trips in SV. Further, because required SV transportation data is not available to validate payments, the Postal Service incurred over $28.8 million in unsupported questioned costs in FY 2018.

We also found canceled trips were not always omitted from HCR supplier payments as required by the HCR statement of work. Specifically, we reviewed about 38,000 canceled trips costing about $2.9 million and identified $2 million that should have been omitted from supplier payments in FY 2018. Furthermore, we noted that highway contracts did not always include language, or consistent language, to omit payments when a trip is canceled by the Postal Service which could result in overpayments to suppliers.

Management of the air transportation network is centralized at Postal Service HQ. The Postal Service is also constrained by internal and external requirements including service standards, limited ability to procure other commercial air carriers to participate in the program and federal restrictions that limit the size and weight of mail carried by commercial air carriers.

The Postal Service HQ Air Logistics Team is responsible for managing an air network comprised of about 80 air stops throughout the country. It also manages 69 terminal handling service (THS) sites which are used to prepare and dispatch mail for [redacted].

The Postal Service’s various cost reduction and technology-based initiatives to optimize its transportation network have had limited success. In surface transportation, neither the HCR Optimization Initiative or the Dynamic Route Optimization program have met planned cost savings.

We recommended management ensure extra trips are reconciled against Surface Visibility data and only authorized account numbers are used for exceptional service in the Service Change Request system; evaluate Highway Contract Route contracts to include consistent language to omit payment when trips are canceled and ensure they are omitted from supplier payments; perform data validation for the information in the Surface Visibility system to ensure extra and canceled trips key performance indicators are accurate and complete; and explore opportunities to increase the use of commercial air carriers.