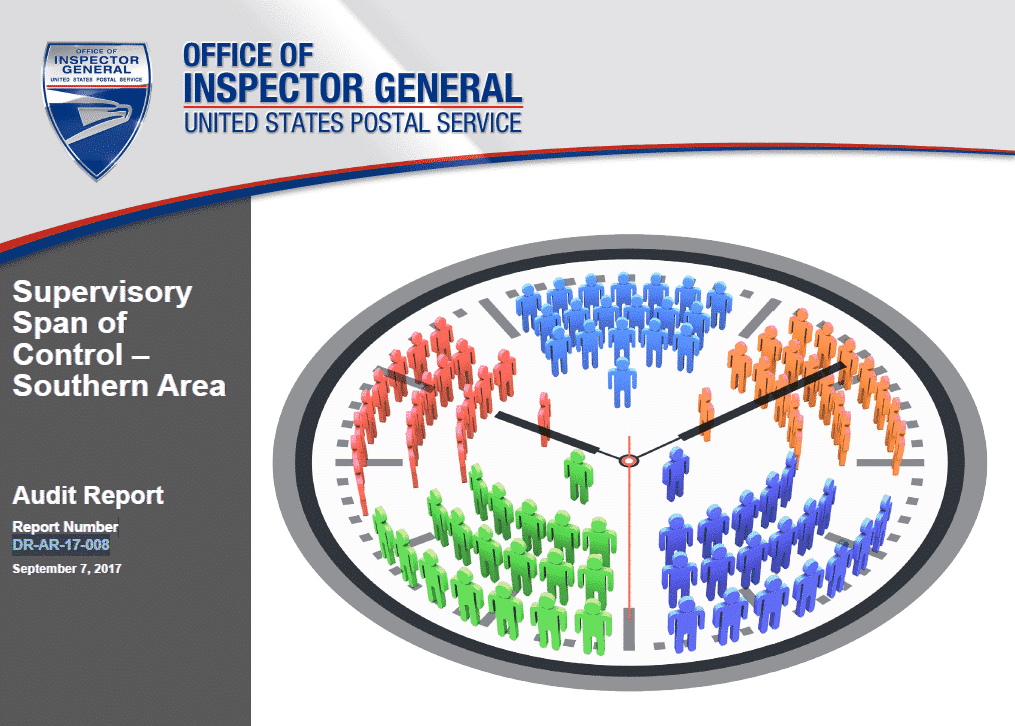 The U.S. Postal Service uses the Supervisor Workload Credit (SWC) worksheet to determine the number of Executive & Administrative Schedule Customer Service Supervisors in post office operations. SWC worksheets are completed on a facility by facility basis, to calculate the span of control – the number of employees that report to each supervisor. Post Office Operations does not have a span of control target. However, a Postal Service Management Structure Study dated July 2003 determined the average span of control of 1:26 for postmasters was consistent with accepted best practice trends.

Our objective was to assess the span of control and use of supervisor workhours in post office operations in the Southern Area.

Consequently, supervisory workhours exceeded the area’s FY 2016 plan by 303,670 hours and also contributed to the use of 805,108 hours of overtime by supervisors throughout the Southern Area. Additionally, facilities with the 292 vacancies accounted for 125,358 workhours over the plan and 238,743 hours of overtime. Filling vacancies and managing personnel assignments would improve the span of control ratio average and the supervisor’s ability to effectively manage daily operational tasks and reduce supervisor workhours.

Southern Area management stated they had several strategies in place to address supervisor vacancies. In May 2017 area management implemented additional strategies to assist districts that included assigning every district an area human resource analyst and conducting weekly meetings with all district human resource managers to discuss each vacancy and actions taken to fill these vacancies. Therefore, we will not make a recommendation on this issue.

In other matters, we identified the SWC worksheet used to determine the authorized number of supervisors in post office operations does not give consideration to all of the supervisors’ daily administrative responsibilities. The SWC’s primary measurement is the number and type of employees supervised and does not include factors for supervisors’ duties and responsibilities when managing these employees.

On March 18, 2017, the National Association of Postal Supervisors in conjunction with the Postal Service initiated a SWC work study at 34 pilot sites in six districts in the Northeast Area. The work study will include a review of supervisors’ daily duties and responsibilities. Therefore, we will not make a recommendation on this issue.

We recommend management monitor the use of supervisors to detail assignments to lessen the impact to post office operations.