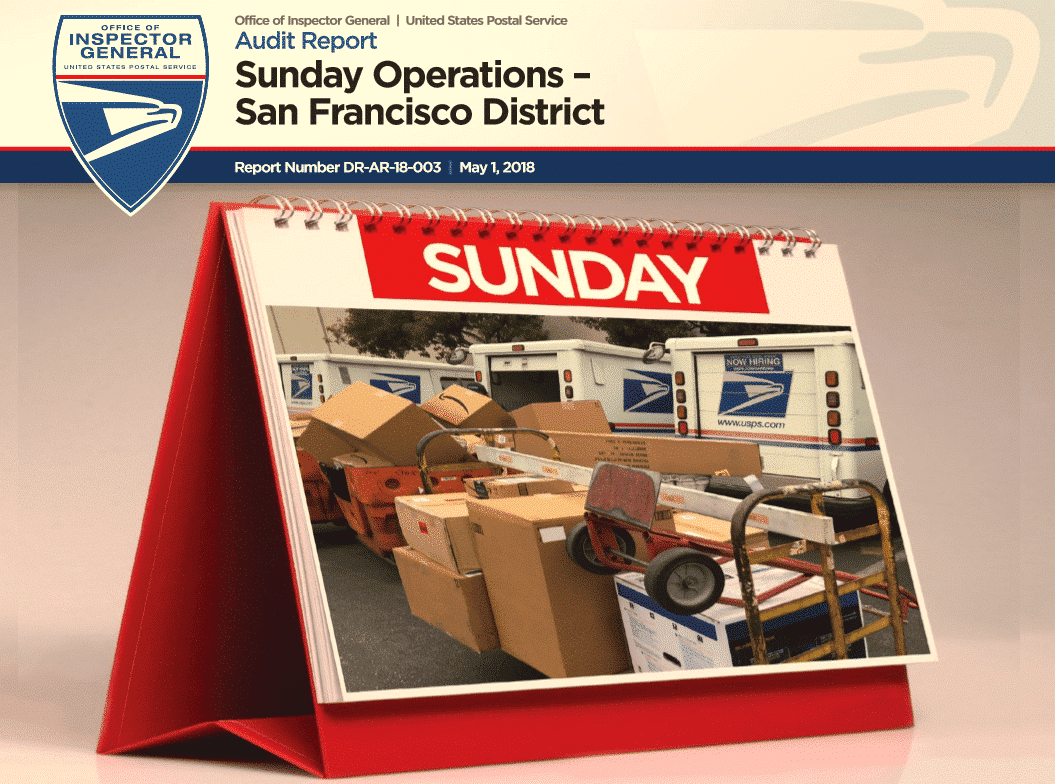 The objective of our audit was to assess the efficiency of Sunday operations in the San Francisco District.

Consumers like the convenience of online shopping and expect quick delivery of those purchases, regardless of the day of the week. In October 2013, the U.S. Postal Service entered into a [redacted] Parcel Select delivery on Sundays in select ZIP Codes. Parcel Select mail, a destination-entry product, is offered at rates competitive in today’s package market.

Postal Service operations on Sunday differ from those followed on the other six days of the week and are performed at designated Postal Service hubs. A hub is a delivery unit set up to accept, sort, and deliver parcels on Sunday destined for addresses served by the hub. The Postal Service planned to minimize operational costs for Sunday operations through the extensive use of non-career employees, including city carrier assistants (CCA), to the maximum extent possible.

The Postal Service is experiencing increased parcel volumes because of the trend toward online shopping and e-commerce. The number of Sunday hubs nationwide has increased from 459 in March 2014 to 2,349 at the end of fiscal year (FY) 2017. The San Francisco District had no hubs in March 2014, but had 39 Sunday hubs as of June 30, 2017. Sunday parcel volume in the San Francisco District increased 19 percent between FYs 2016 and 2017.

We selected the San Francisco District for this audit based on the usage of regular full-time city carriers working on Sundays in FY 2017.

Sunday operations were not always efficient in the San Francisco District. Specifically:

■ Reporting of operational issues related to late trucks and mail presentation was not always submitted to the Local Operations Center or the Pacific Area.

These issues occurred primarily because the San Francisco District has had difficulties hiring and retaining sufficient CCAs. District management also did not enforce the use of the DRT processes at all hubs. Finally, hub personnel were not aware of the requirement to report operational issues, such as late truck arrivals and improper mail preparation, to the district local operations center. Further, some hubs did not submit the Pacific Area escalation surveys. The Area surveys are used to report operational issues with the seven sortation centers servicing the delivery hubs.

■ Identify and implement efforts to increase the use and retention of CCA employees.

■ Develop a Sunday checklist/guide and provide training to all personnel in charge of Sunday operations at the hubs.

■ Require all hubs in the district to submit appropriate escalation surveys to report any Sunday operational issues.