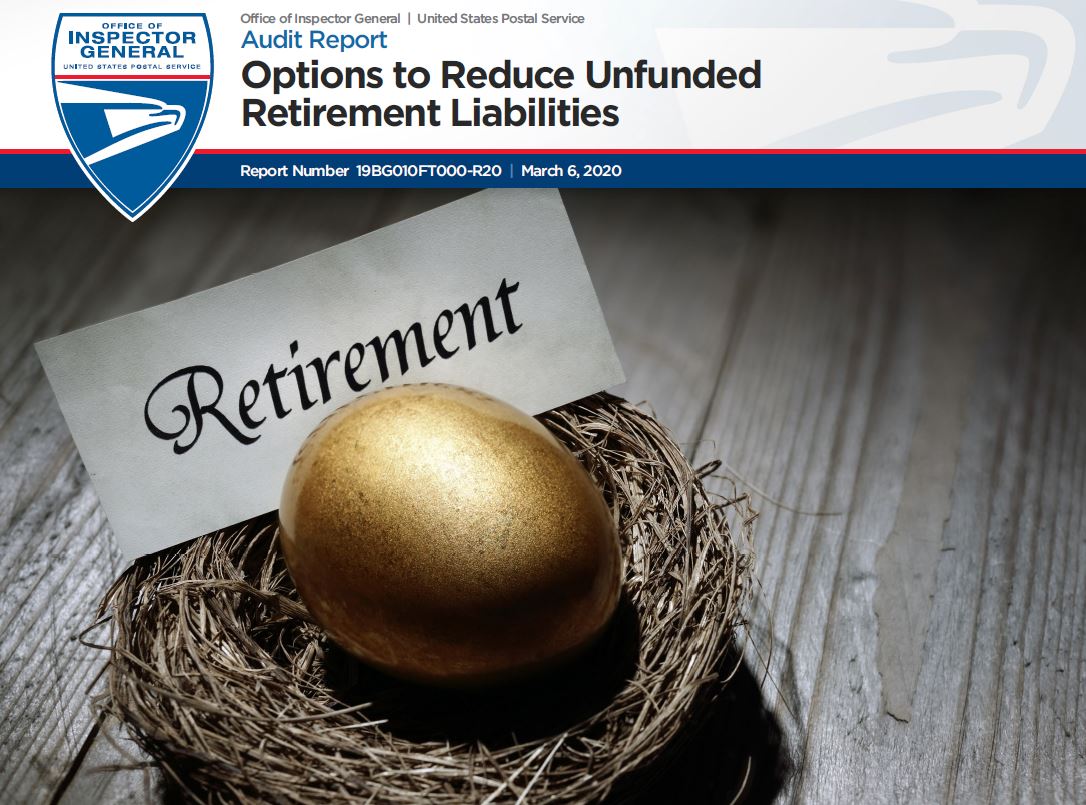 The U.S. Office of Personnel Management (OPM) administers these programs, including measurement of liabilities. Calculations of the CSRS, FERS, and RHB liabilities exhibit varying degrees of sensitivity to certain economic and demographic assumptions that are subject to change.

In conjunction with the U.S. Department of the Treasury (Treasury), the OPM manages the Postal Service’s retirement investments. The assets of the CSRS and FERS plans are held in one fund in the Treasury, and RHB assets reside in a separate fund. Under current law, assets of these plans are restricted to government trust funds invested solely in fixed-rate U.S. Treasury securities or other government-guaranteed securities, which are often regarded as riskless in the sense that there is virtually no possibility of loss of principal. However, the trade-off for this safety is a low rate of return that carries the risk of not generating adequate investment income to meet all the future obligations of the funds.

There are a number of options, some of which have been in past proposed legislation or are under current legislative consideration, to address these funding shortfalls, such as:

Our objective was to explore the last two of these options to address reducing unfunded retirement liabilities. First, we evaluated potential changes to life expectancy (mortality-improvement) assumptions used to calculate the RHB liability. Next, our investment consultant determined the potential impact of investing Postal Service retirement contributions (and employee contributions to CSRS and FERS) in six different sample portfolios of diversified assets, beginning in fiscal year 2020. Retirement assets held in Treasury as of the end of fiscal year 2019 would remain in Treasury, earning interest and funding pension payments and RHB premiums, until balances reach zero.

After a century of generally rapid mortality improvement, there has been virtually no improvement this decade. In recent years, actuaries’ projections (for small improvements) have failed to materialize. Changing the mortality-improvement assumptions used by the OPM to calculate the RHB liability, to better reflect developments post-2010, could reduce the Postal Service’s unfunded RHB liability by about $4.2 billion. This change would be independent of other changes, such as Medicare integration or calculating only the vested RHB liability for funding purposes.

In addition, by investing future employee and Postal Service retirement contributions in diversified portfolios of stocks, bonds, and other assets, the unfunded Postal Service pension and RHB liabilities could effectively be reduced by increasing returns on its three retirement funds. Based on projected payments into CSRS, FERS, and RHB, comparing six diversified portfolios against the current investment strategy, we found that each of the six would likely improve funding levels over 20 years.

We recommended management work with the OPM to update the mortality improvement assumptions it uses to calculate the Postal Service’s RHB liability. We recognize that investing employee and Postal Service future retirement contributions in a diversified portfolio of stocks, bonds, and other assets requires legislative change. Therefore, we are not making a recommendation regarding diversification of retirement investments. We continue to encourage management to work with Congress on this and other matters to address unfunded retirement liabilities.