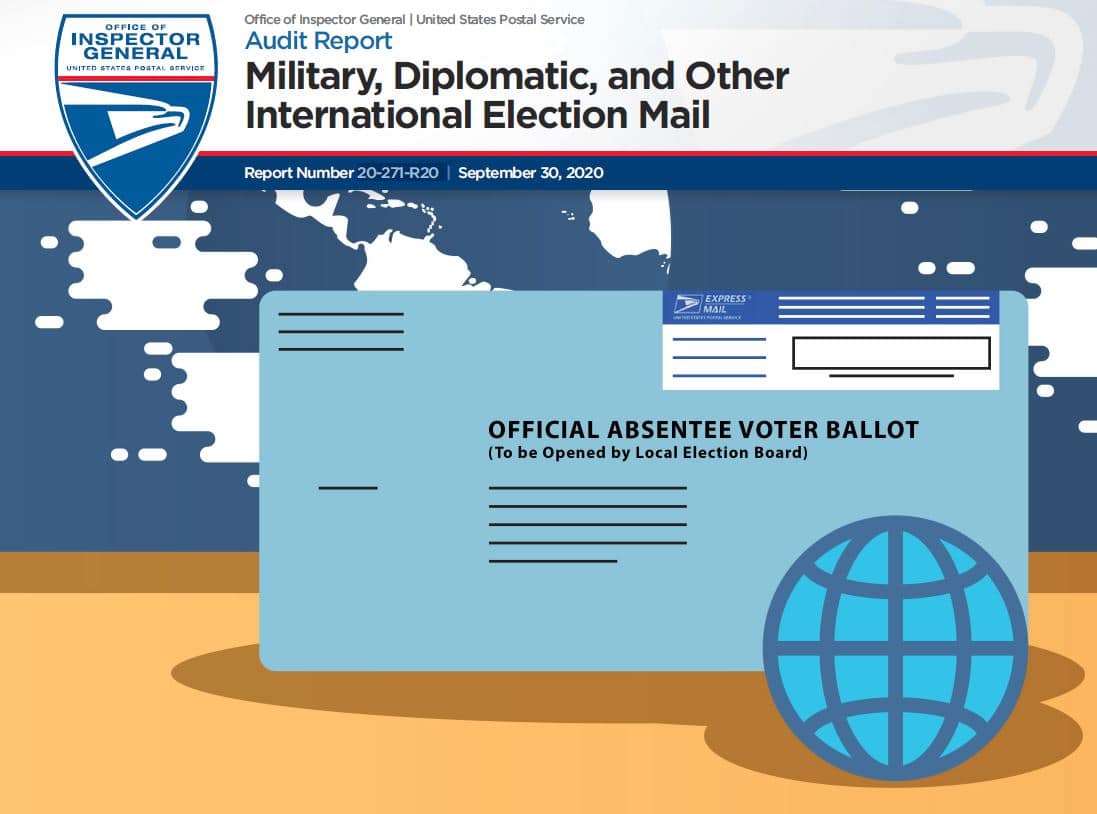 Our objective was to evaluate the Postal Service’s preparedness for processing international election mail, including military and diplomatic mail.

The Postal Service processes international election and political mail for eligible U.S. citizens throughout the world. Military and diplomatic members and their families or other U.S. citizens located in foreign countries can use or receive these types of mail. Election mail is any item mailed to, or from, authorized election officials that enables citizens to participate in the voting process. For example, local election offices in the U.S. send ballots or other election materials to international recipients and the international voters mail their completed election ballots back. Political mail is related campaign or messaging mail, and generally entails only outbound operations.

International election and political mail are typically processed at one of the five International Service Centers (ISC) which are located in New York, Miami, Chicago, San Francisco, or Los Angeles. Processing operations for military and diplomatic election mail are co-located with Postal Service processing functions for other international mail (i.e., letters, parcels, periodicals, etc.). Most international military and diplomatic mail is processed through the Chicago facility, and it is estimated this facility will receive about 80 percent of inbound military mail ballots for the 2020 presidential election.

The Postal Service implemented a series of nationwide initiatives in July 2020 to improve operational efficiency. These efforts included a focus on reducing late and extra transportation trips and aligning workhours to mail volume workload. In addition, the Postal Service has been removing mail processing equipment since 2015 as a result of decreased mail volume. The Postal Service also implemented an organizational realignment in August 2020, which included moving the ISC reporting structure from the respective Areas to Headquarters.

The Postal Service’s preparedness for processing international election mail, including military and diplomatic mail, is at risk based on mail processing delays at the Chicago ISC. Operations at the Chicago ISC were significantly impacted beginning in late March 2020 primarily due to the COVID-19 outbreak and delays remained into mid-August, the time of our most recent observations at the facility. These delays threaten the facility’s overall ability to timely process military, diplomatic, and other international election mail.

Our analysis of Postal Service data for all international mail showed over 137,000 delayed pieces – both inbound to and outbound from – the Chicago ISC in mid-August, broken down as follows:

These delays stemmed primarily from staffing shortages, outbound mail restrictions, presentation and screening delays, and transportation-related delays resulting from the COVID-19-pandemic, as follows:

While finalizing this report for publication, we observed operations at the Chicago ISC on September 29, 2020, as part of another ongoing project. International mail operations appeared significantly improved from our August 2020 observations. Specifically, the workroom floor was visibly clearer of inbound and outbound mail, as was the holding area for mail going into and out of CBP. These operational improvements were consistent with the implementation of Recommendations 1 and 2, as noted below.